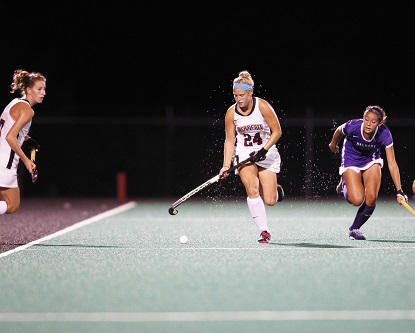 Aliza Furneaux ‘17 pushes the play down the field. Photo courtesy of Athletics

Despite a loss to the University of Pennsylvania on Tuesday, Lafayette’s Field Hockey team remains hopeful as they head further into Patriot League play this weekend. With a third of the 2015 regular season remaining, the Leopards will rely on their depth to spark a successful post-season run.

The squad currently holds a 6-6 overall record and is 1-1 in the Patriot League.

After a loss to Boston University in their first league game – a loss that triggered a four-game losing streak – Lafayette bounced back with a hard fought win at Lehigh University, marking the squad’s 10th straight victory over their rival.

Junior captain Amanda Magadan started the scoring with a goal in the first half, which was matched just three minutes later by Lehigh. Junior Ami Turner scored the team’s second goal with 15:29 remaining in the game to seal the victory, and the win streak.

“Overall, it was a scrappy game,” head coach Jennifer Stone said. “[Lehigh] is feisty, and they’re dangerous at certain times in the game, so I thought that our style of play wasn’t exactly what we had wanted…but I thought the girls adapted really well. And again, any time you beat Lehigh, no matter what happens, it’s great.”

“We do want to win the Patriot League Championship this year,” added Magadan, a midfielder and forward for the team. “Going into that game and getting a win was big especially because they’ve really grown as a team, and they’re a lot better this year.”

Unfortunately, the Leopards’ luck did not continue through the week, and the team returned home from Penn with a 5-0 loss. A strong start by the Quakers, including two goals in the first 12 minutes, resulted in Penn’s eighth straight win and Lafayette’s sixth overall loss.

“It wasn’t out best showing,” senior captain Hannah Millen said. “We’re having trouble starting out strong. We’re having the tendency of being a second half team, so we’re trying to figure out what motivates us for the first half, so we can start strong.”

“We do have a really good team, and when we want to show up we play well,” Magadan added. “It’s finding that consistency piece. We created a decent amount of attacking opportunities, but we just didn’t capitalize, and then defensively we just didn’t have a great game.”

As the post-season approaches, Lafayette will look to senior leadership and a promising freshman class to push them through their final six games, four of which are against Patriot League opponents.

“The league this year is a really strong one. It has been for the last couple of years,” Stone said. “I think any team as the potential to win any league games at any point. Traditionally, Bucknell and American are among the top teams in the Patriot League, so those two games for us are important from that standpoint. We should just take it one game at a time, and focus on the present.”

Under the leadership and experience of Millen and Magadan, further success in the league is certainly possible. Magadan currently leads the team in scoring with seven goals, three assists and 17 overall points. As a defender, Millen fills a different role on the field, but has still contributed three goals and two assists to the offensive effort.

“Me and Amanda have totally different personalities,” Millen said. “She’s more out going, and I’m more reserved. We both like to lead by example. I like to play hard and get people motivated from that. Amanda is more motivational with her talks, but she’s also a great player, so she leads by example as well.”

A strong freshman class will also be key to post-season success. Freshmen Kristen Taylor and Theresa Delahanty, have already made a significant impact, and logged considerable minutes on the field.

“Our freshman class has been doing a really good job taking in all of the new information…and then applying it in our games and practices,” Millen said. “Everyone for the most part on our bench is getting in, which is good compared to…previous years where we’d only have a starting eleven and maybe two subs. I think it’s helping us and I think we can last longer in games, and just in the season in general.”