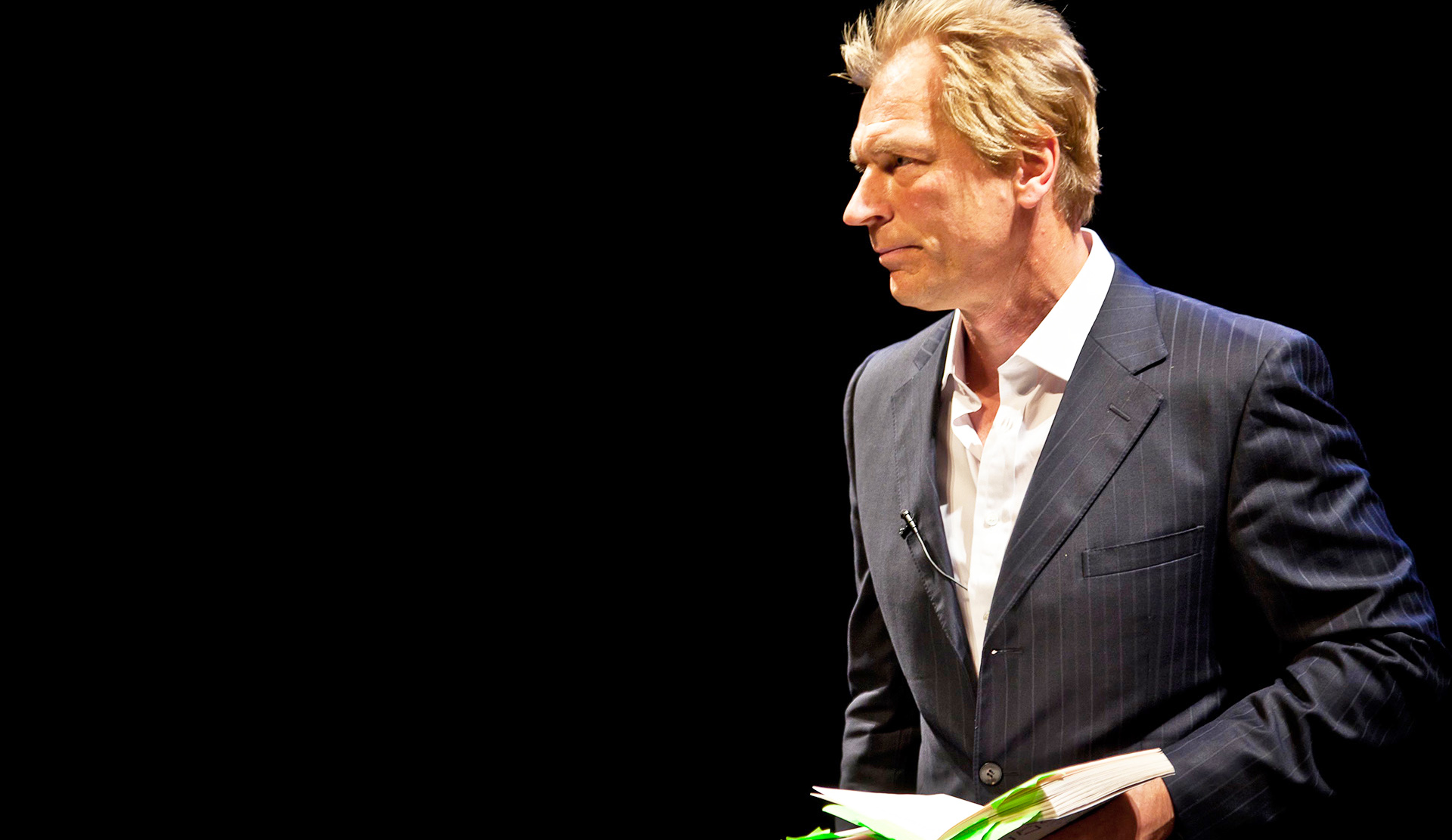 The stage was almost barren. A small, square, wooden table stood humbly in the center. Atop the table rested a copy of the book, “Various Voices of Harold Pinter,” and several pieces of paper from which Sands would later read quotations.

Director of the Williams Center for the Arts Hollis Ashby took the stage to introduce the theater’s fall series. Ashby named the night as the beginning of another exciting season and welcomed Sands to the stage. The house lights dimmed, but did not completely turn off, which was the initial hint that the “fourth wall” would not entirely be there.

Harold Pinter was one of the most influential modern British dramatists. Some of his works include, “The Room,” “The Birthday Party,” “The Caretaker” and “The French Lieutenant’s Woman.” Pinter’s “The Homecoming” won a Tony Award and was considered by many to be his greatest work.

After entering to resounding applause, Sands stood silently, looking out at the audience. Already, he had commanded the attention of the room. Sands opened with a few lines from one of Pinter’s poems that later served as the introduction to a personal story.

Many people might recognize Sands from the several film acting roles he has performed, being featured in such films as the Oscar-nominated “The Killing Fields,” “A Room with a View,” “The Girl with the Dragon Tattoo” and “Oceans 13,” as well as television roles in “24,” “Smallville,” and “Dexter.”

Over the course of the evening, Sands switched back and forth between speaking to us candidly, and performing Pinter’s pieces as though he were Pinter. The distinction between his charismatic, casual voice and the severe, lusty voice of Pinter was truly wonderful.

In 2005 Pinter was awarded the Nobel Prize for Literature. At that time he approached Julian Sands and asked him to compile a selection of his poems for a special presentation in London. In preparation for this presentation, Sands spent countless hours with Pinter, learning the intended tone, delivery and meaning behind every aspect of each work. During this time, the two formed a remarkable bond, which led to the creation of the solo show Sands performed Tuesday night.

“A Celebration of Harold Pinter” premiered at the 2011 Fringe Festival, and was intended to be exactly that: a celebration of the life of the legendary writer, who passed away in 2008 from liver cancer.

The play revealed Harold Pinter as a man, a poet, a playwright, a husband, a political activist and a Nobel Prize winner. The audience laughed at the absurdities and the profanities, and smiled tenderly at the sentimental moments. Sands performed pieces from each stage of Pinter’s career and personal life, including love poems to his wife Antonia and poems about the cancer from which he eventually died. The performance was truly breathtaking.

After the evening, Sands joined the audience members in the lobby of the William’s Center for light refreshments, book signings on Pinter’s behalf and brief discussions about the play.

View all posts by Aleni MacKarey →