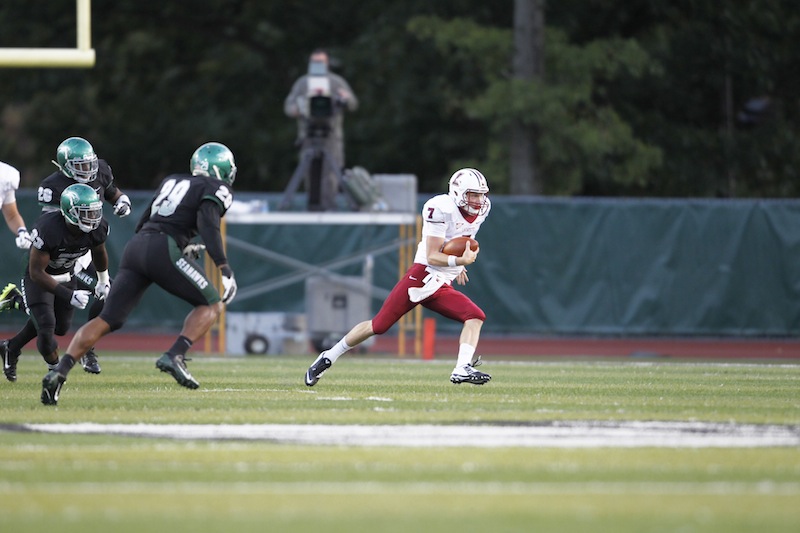 Following a missed game due to suspension and two lackluster games to start the season,

Reed looked much like the player that led the team his freshman year. Throwing for four

touchdowns and rushing for another, Reed’s performance garnered his first 300-yard game

“This week is a big testament to our receivers,” Reed said. “They were getting separation down

the field. They made big plays the whole day.”

Down 21-24 in the fourth quarter, Reed looked to Mrazek for an end zone catch that resulted in

“That’s what Mrazek does,” Reed said. “He comes though in big situations… He goes and wins

balls that maybe he shouldn’t win.”

distinguish who will carry Lafayette running backs in the post-Ross Scheuerman era. Junior

Kyle Mayfield led the team this week with 29 yards on 9 carries.

Despite giving up 385 total yards on the day, the Lafayette defense showed renewed passion

offense to mount the comeback.

“Before the game, coach Link got us…pretty pumped up about this game because I think we

were lacking energy in these first few games,” senior defensive back Alex Merriman said. “I

think we really pushed the defense to really show some passion, show some emotion in this

large departure of starters with graduation. Injuries have also plagued the Leopards and have

forced an already young team to get younger. Missing players such as junior wide receiver Tim

players to step in.

“There is no exchange for game experience,” Tavani said. “But we keep throwing young kids out

there and they keep performing.”

week. Containing the Rams’ offense will be a tough task as they average over 400 total yards

“The league favorites are coming to town with a high powered and smart offense,” Tavani said.