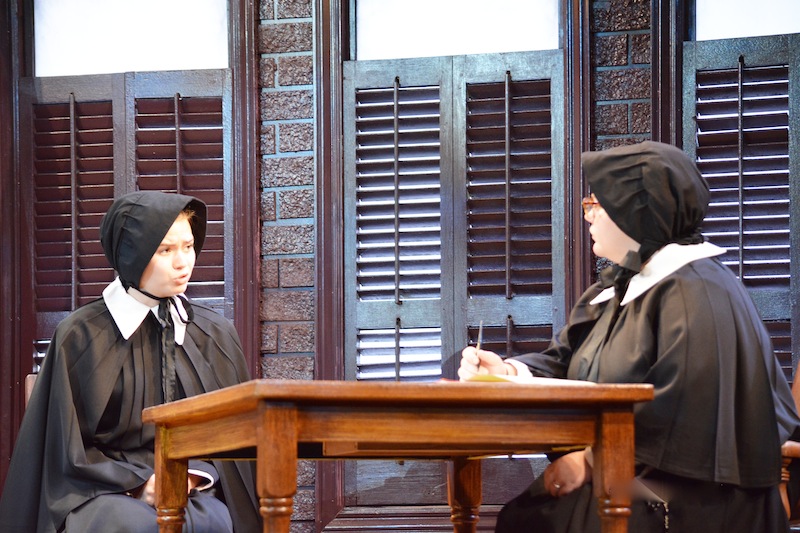 Few things are as powerful as doubt. Doubt paralyzes the body and clouds the mind, making one question that which before they found dear. The Lafayette Theater Department’s rendition of John Patrick Shanley’s play “Doubt” captures this confusing emotion perfectly, and poses challenging moral questions to the audience.

The play is about a strict and old-fashioned nun, Sister Aloysius, who levies accusations of misconduct at a warm, progressive and extremely popular priest, Father Flynn. The young, innocent and impressionable Sister James is caught between them, engaging in her own battle with her doubts over both sides.

Each character has meaningful and understandable motivations, and the two main parties in the central conflict of the play, Aloysius and Flynn, are remarkable complex. It was very difficult at times to know who to root for, and my grappling with my own doubt over the characters and story was a major part of the experience of the play. It is not a story for a passive audience; one must be prepared to engage “Doubt” intellectually to get the most out of it, but it is a very rewarding experience.

The ending brings little closure, and audiences are left to find the answers to the play’s questions on their own.

The four-person cast deserves a great deal of praise for how well they were able to portray these remarkably complex and subtle characters.

Chris Melka ’18 shines as Father Flynn, pulling the audience in with the charisma of his sermons throughout. Megan Thomas ’16 was remarkable in how well she portrayed the blunt honesty of Sister Aloysius, and her frank, undiplomatic responses are some of the highlights of the show.

Meryl Hahne ’18 excels in the role of Sister James, and her descent from naive happiness to doubt-racked depression is very captivating. Chanel Mowatt ’17 is given very little time to work with as Mrs. Muller, the mother of one of the boys at the parish school, but she manages to bring a remarkable amount of depth to her character in that time.

The set was perfect for the play. The intimacy of a black box can make each scene more poignant, and director Mary Jo Lodge uses the limited space to maximum effect here. In “Doubt,” two characters a table’s length away from each other can feel like they are standing miles apart, and Lodge really captures this feeling. Really, the only shame of the black box format where this show is concerned is how few people it can hold. This play really deserves a wider audience, which is difficult in a black box.

The costume design was good, really capturing the feeling of Catholics of the 1960s. Given how little the style has changed over the years, that may not be saying much, but the attention to detail really helped draw me in.

“Doubt” is a really good production of a really good play. It is challenging, engaging, captivating, and altogether just a good show. Seeing “Doubt” was one of the most enjoyable theatrical experiences I’ve had at Lafayette, and I encourage everyone to go see it.

“Doubt” premiered on Wednesday and runs through Saturday. Showtime is from 8:00 p.m. to 9:40 p.m. Tickets are $10 for general admission, $5 for faculty and staff and $3 for students.