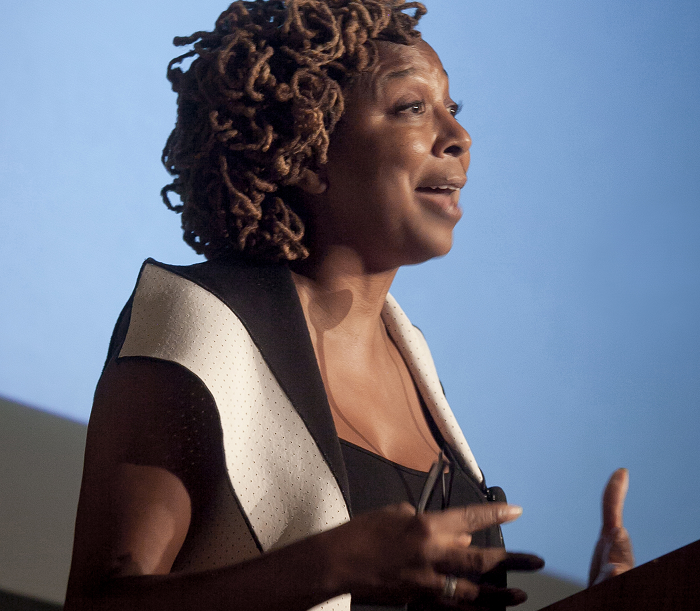 Leader in the field connects gender and race

Tanisha Anderson, Miriam Cusseaux, Rekia Boyd, Aiyana Stanley-Jones, Miriam Carey, Tarika Wilson, Kathryn Johnston, Alberta Sprulli: these are just a few among the many black women who have lost their lives due to racial and gender discrimination in the U.S. They are also among the many who have been erased from our public discourse, according to scholar, activist and theorist Kimberlé Crenshaw.

On Sept. 17, Crenshaw gave a keynote lecture for the 30th anniversary of the Women’s and Gender Studies program at Lafayette. Crenshaw discussed the many ways that black women face discrimination and erasure in U.S. society.

In 1989, Crenshaw, a leading authority in the areas of civil rights, black feminism and legal theory and race, coined the term “intersectionality,” which is used to explain the way multiple forms of identity, such as race, gender and sexual orientation, interact in experiences of oppression.

Black women, for example, experience oppression differently from white women or black men, according to Crenshaw. Their discrimination cannot be categorized under either racism or sexism, but as a combination of both.

The concept of intersectionality is at the heart of gender studies scholarship today, Chair of the Women’s and Gender Studies program professor Mary Armstrong wrote in an email.

Crenshaw argued that black women have historically been made invisible in legal recourse. She spoke about the DeGraffenreid v. General Motors case in 1976, where a collective of black women sued G.M. under the Civil Rights Act of 1964 for a combination of sex and race-based discrimination.

The claim was dismissed, according to Crenshaw, because the court refused to accept a combined discrimination claim, ignoring the ways that race and gender intersect to create oppression for black women.

“You rape our women…you have to go,” was allegedly proclaimed by Dylann Roof before shooting three black men and six black women in the incident. While the statement was directed at black men, Crenshaw said, his racialized violence affected primarily black women.

“Intersectionality is discursively everywhere and politically nowhere,” Crenshaw said. While black women face discrimination due to their gendered and racialized identities, she said, they are excluded from some of the most transformative policy debates concerning the various communities they are part of.

For instance, Crenshaw discussed the way black women’s issues are not addressed even within the recent Black Lives Matter movement.

“Over and over again within the [Black Lives Movement], we were struggling to get people to acknowledge women are killed by the police, too.” Crenshaw said. The “Say Her Name” movement emerged as a result of the lack of attention given to black women killed by law enforcement, Crenshaw said in the lecture.

To address the needs of black women, Crenshaw has been conducting town hall meetings around the country, giving victims a space to share their stories.

“Professor Crenshaw’s work is an example of intersectionality at its best,” Armstrong wrote in an email. “With an intersectional perspective, you can shine analytical light on people and systemic problems that are not otherwise visible.”

“If you went to Crenshaw’s talk and suddenly realized you did not know the name of one Black woman who had been wrongly killed by law enforcement,” Armstrong added, “you saw a shocking knowledge gap that did not know you had.”

Dean of Intercultural Development John McKnight said that Crenshaw’s lecture has the potential to influence activism for Lafayette students.

“When I’m presenting some information about diversity and social justice, people aren’t sure what to do,” McKnight said. “[Crenshaw] led with the theoretical part of it and talked about the thinking behind intersectionality and then drove the point home by showing footage of her on the ground, being part of these movements.”