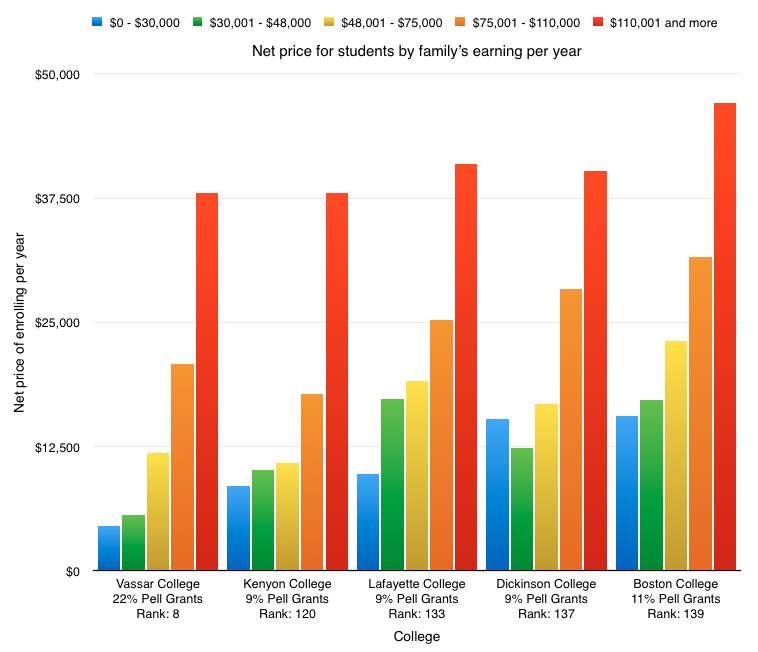 Data courtesy of collegescorecard.ed.gov. Reliable data in the number of students in each income class were unavailable.

When Lafayette placed low for the second consecutive year in a socioeconomic diversity index, college working groups and enrollment committees confronted the problem of public perception.

The New York Times ranking system, called the College Access Index, uses the share of Federal Pell Grant recipients in incoming classes and the graduation rate of those students, as well as the price colleges charge low- and middle-income students. Lafayette ranked 133rd out of 179 colleges and universities.

Pell Grants are federally-funded grants typically given to students from families making less than $70,000 a year. The largest Pell Grant given out this year nationwide was $5,775, according to the US Department of Education.

When the index was released last year, President Alison Byerly said she forwarded it to the Board of Trustees and noted that socioeconomic diversity was an area in which the college would like to improve.

Director of Financial Aid Ashley Bianchi agreed that while Lafayette has made strides and is a diverse place, it can be improved.

“We’ve been very successful in recent years with enrolling a great class,” Bianchi said. “The class [of 2019] looks diverse, it seems to be all of the right things. Except perhaps economic diversity has been the thing that’s lagging behind.”

With this in mind, the college has engaged in several discussions about socioeconomic accessibility on campus.

“A lot of the work that is going on this year in our thinking about the colleges budget reflects an interest in looking at how the college can improve our  standing in the area of accessibility,” Byerly said.

The second update to the index came just two weeks after the U.S. Department of Education unveiled its College Scorecard database that reveals to prospective families the annual costs, graduation rates and salaries after graduation for colleges.

Last year, the Enrollment Planning Committee considered the College Access Index and recommended that the college increase diversity by admitting more Pell Grant recipients, according to Bianchi. There were 68 Pell Grant recipients in the class of 2019, 16 more than last year.

“The class of 2019 was really the first year that we kept a conscious effort of who is in the class and who is a Pell Grant recipient,” said Bianchi, adding that having a Pell Grant would have been a positive attribute in the admissions process.

“Anecdotally I would say that a student who was a very needy student who qualified excellently elsewhere – I think having a Pell Grant on board would have been a positive attribute,” she said.

“We knew we couldn’t make up that much ground in a year, specifically because the year wasn’t even counted [in the index],” Bianchi said.

The trade-off between aid and a high ranking

Lafayette has a policy to meet 100 percent of declared need for all those admitted, but it’s budget is limited, according to current Chair of the Enrollment Planning Committee Markus Dubischar.

“We fund those who are admitted,” Bianchi said. “We work very closely with the admissions office [towards the end of the process] to make sure we’re admitting the right kinds of students that can pay, but there are times where we have to be need aware.”

Dubischar said that there was a trade off between offering more money to low-income Pell Grant recipients and the diversity of student body.

The average financial aid package granted to students needing financial aid is $45,000, up from $35,000 a few years ago, according to Bianchi. The percentage of students on aid has also decreased from 50 percent to 45 percent.

“The best way would be to overall increase revenue so we have more resources,” Dubischar said, “then we can leave all the other things as they are, and grow at the Pell Grant accessibility level.”

$60 million of the $400 million that Lafayette’s Capital Campaign is aiming to raise is to be devoted towards financial aid, merit- and need-based.

Using the index in the future

Dubischar and Byerly don’t completely agree with the conclusions that are drawn from the index as it is.

Despite these concerns, two presidential task forces, the Working Group on Student Profile, Tuition, and Financial Aid and on Enrollment Size and the Enrollment Planning Committee will use it to assess where the college stands and how it should choose the next class.

The Enrollment Planning Committee plans to meet on Thursday, after deadline, to discuss the index as one of two topics on the main agenda. Bianchi could only speculate on what exactly might come of the meeting.

“I think it is revisiting the resolution that the same committee made last year,” Bianchi said, “and then thinking about if we are going to make any resource changes for this coming 2020 class going forward, how we might treat Pell Grant recipients differently.”

Dubischar said that the committee he’s chairing may not be able to impact their standing on the index very soon.

“I’m not sure whether we can have immediate action now so that it has noticeable effect next year,” Dubischar said. “What I can guarantee is that if you’d ask me three years from now will the college have responded, my answer would be absolutely yes.”

When asked if she sees the college becoming need-blind in the future, meaning the college doesn’t consider financial need in the application process, Byerly said that it would have to be a big decision with many departments.

“It would be a big financial step,” she said. “It would take years to achieve that, but it’s something that I think at this stage the college should be prepared to think about.”