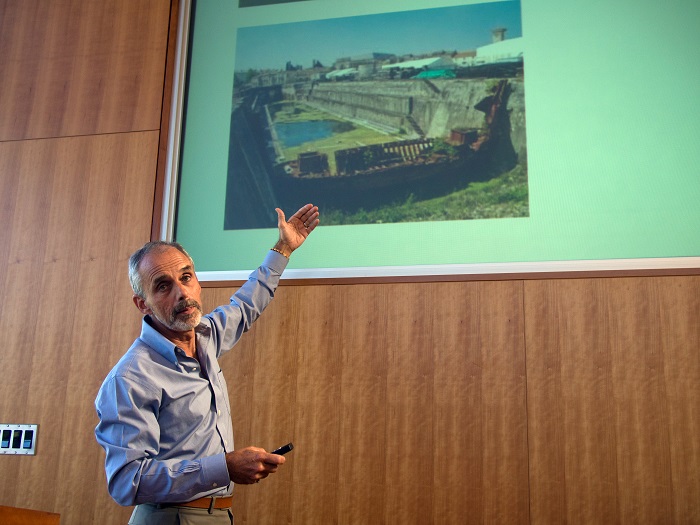 This past Tuesday’s annual Lafayette Birthday Lecture sought to educate Lafayette students and faculty about the Marquis’ legendary ship.

As Director for Special Collections and College Archives Diane Shaw introduced Maritime Operations and a crew-member for the Hermione Marc Jensen to the audience at the Skillman Library, pictures of the historic Hermione voyage filled the projector in front of the room.

In April, The Hermione set sail across the Atlantic Ocean. Jensen’s skills as a sailor, engineer, educator and crew coach, as well as his fluency in both French and English helped him play an important role in the preparation of the ship.

The Hermione was built to model the original ship that set sail in 1780 to carry Marquis de Lafayette to the U.S., where he delivered the news that France would serve as an ally in the Revolutionary War. The new Hermione took 17 years to build.

“Even though it was a local project, it proved to have national ramifications,” said Jensen, recalling the 65,000 who came to watch the Hermione first set sail on a test run in 2012 in Rochefort, France. The true influence the Hermione had was realized in that moment, and Jensen knew that the voyage had to serve an educational purpose as well.

“I wanted this trip to be meaningful for young people, ages 12-18,” Jensen said. “So, we created four webinars for students to watch the trip, and about 400 did in fact watch.”

Jensen went on to discuss the daily life of a sailor aboard, drawing comparisons between his experience and that of the original crew-members back in the 1780s.

Jensen’s passion for educating others was not lost on the voyage. He emphasized the importance of relating this experience to young adults and continued this outreach when coming to speak here at the college. Jensen said he hopes the Hermione will set sail again in 2018, possibly coming back to the East Coast of the United States.

For more information regarding the voyage of the Hermione, there is an exhibit of photos from the voyage on the first floor of the library.