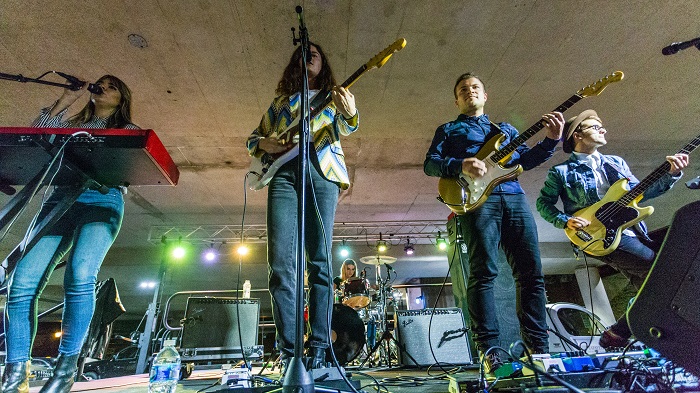 When I found out BØRNS was coming to campus, my inner indie back-flipped with curiosity and excitement. Familiar only with the smash hit “Electric Love,” I anticipated the opportunity to discover the band’s other songs in a live setting.

Because of the rain that day, the concert was moved from March Field to the Markle Parking Deck. The new spot ended up providing a distinctly urban “underground” ambience I imagine would have been difficult to accomplish if the concert remained on March Field.

Before he took stage, I nabbed the opportunity to steal a couple of words with lead singer Garrett Borns. His presence exuded the subtle grace of an up-and- coming star. Adorned in a red, zig-zagged patterned jacket, Borns’ chestnut locks trailed past his shoulders. He looked like a 70s Robert Plant, graced with an 80’s Bowie aura.

Borns exclaimed his excitement over the opportunity to take the stage underground, as he had never performed in a parking deck before.

“The acoustics should certainly provide for an interesting show,” he said.

The 23-year old singer took the stage with an ensemble of two male guitar players, a female keyboardist and a female drummer. I was particularly jazzed to see a girl behind the drum set, as I have never had the pleasure of witnessing a female drummer perform in front of a crowd before.

The band opened with the upbeat track “Seeing Stars.” The female members crooned in the background, complementing Borns’ falsetto vocals. The funky arrangement on the keyboard made it easy to tap your toes to the music.

The crowd grew amped as Borns continued his arrangement of groovy, melodic hits. The song “Past Lives” opened with an echoing harmonization of the lyrics, “Past lives couldn’t ever hold me down, lost love is sweeter when it’s finally found.” This song was my personal favorite, as its ethereal beginnings built up a tangy tune to bob your head to, and eventually bust a full-out move.

Students went wild when he flawlessly covered Elton John’s “Bennie & The Jets” as well as Bowie’s “Moonage Daydream.” Twisting and twirling the chord of his microphone, Borns sang, “I’m an alligator, I’m a mama-papa coming for you.” He danced on stage and flipped his hair, as the audience’s excitement continued to amplify.

“Overall, I think that the show was extremely successful,” said LAF Board Member Lila Silver, who helped organize the show. “At this point, Borns is a relatively undiscovered talent, but I believe that will change soon. I see him as an up-and-coming star.”