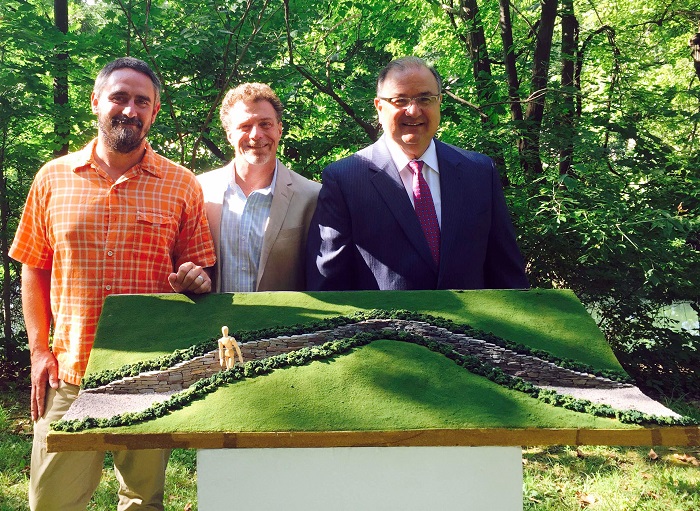 As the new fall weather emerges, many Lafayette students can be seen taking advantage of the running weather down the hill at the Karl Stirner Arts Trail.

But the non-profit public art park is more than just a place for students to run on a beautiful day. Sculptures and other pieces of art can be seen throughout the park, and come spring, there will be a new piece added to the collection.

The Board of Governance of the Karl Stirner Arts Trail held a competition in which artists connected to the Easton community were able to submit a proposal for a new sculpture. Paul Deery the won the competition, which included about two-dozen other artists, and will install his piece, “Water Way,” on the trail.

“The only stipulation was that you were somehow related to the Easton area,” said chairman of KSAT Jim Toia. “We just didn’t want a ton of people from all of over the world who had no connection to the college.”

Deery has a connection to Easton, along with the arts trail creek. Deery owns PM Landscaping, which is located right down the hill on West Lafayette Street.

“I drive along the creek multiple times a day, I fish in the creek, I take my kids to play in the creek,” Deery said. “It’s been a pretty significant part of my life since I moved here.”

Deery’s background in sculpting and landscaping is also what made him want to submit a proposal for the competition.

“The idea started to formulate about trying to do something that would sort of accentuate the trail a little bit,” Deery said. “I like to have interactive artwork so that people have to not only just look at it, but do something physically.”

The proposed work will create a channel that will cut into one of the banks coming off the trail and down to the creek, allowing visitors to essentially walk through his piece.

All the proposals were featured in the Grossman Gallery in the Williams Visual. Anyone who walked through could vote for his or her favorite.

“We wanted the community’s voice to make the final decisions about what piece would be chosen to put on their trail,” Toia said.

The arts trail board held an auction at the college last year, and raised $40,000. Ten percent of that money is going towards the winning applicant’s proposal.

“In our invitation for proposals we said that there would be a $4000 stipend,” Toia said. “The artists knew beforehand when they were writing a proposal how much would be available to them.”

Deery knew the $4000 would not cover his proposal, so in the spirit of connecting the Easton community, he began to reach out to local businesses.

“With my landscaping company having had so much built up history and business interactions with local companies like local nurseries and local landscape supply houses, I was able to get all the materials donated for the project,” Deery said.

He is now able to use the stipend money to pay the workers who will build the sculpture. His addition to the trail brings the board one step closer to their long-term goal of getting both the Lafayette and greater Easton communities more involved in the arts trail.

Deery wants the community to be involved in his project.

“I’m trying to have this be a somewhat community based project,” Deery said. “It’s about the community. It’s an arts trail for the community.”