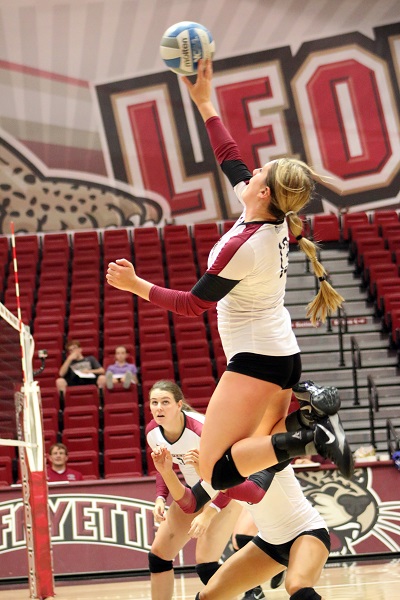 After sweeping four games at the Crosstown Tournament, Lafayette Volleyball has earned themselves the program’s most promising start since 2012.

Their current 4-1 record is already an improvement on their 2014 season in which they went 6-22. Head Coach Terri Dadio Campbell attributes their recent success to excellent leadership and increased roster depth.

“If someone is struggling…there are a lot more opportunities for others to go in and add more energy and certainly help us to earn more points,” Dadio Campbell said.

Lack of depth due to injuries hurt the Leopards last year. Junior Samantha Volk, the team’s primary setter, was out for the majority of the season, leaving sophomore Tori Smith to step up and play out of position. With Volk back on the court this season, Smith is free to return to her primary position as outside hitter.

The class of 2019 has also made huge contributions, especially freshman Maria Balus, another setter, according to Dadio Campbell.

“[She] has really stepped into that position with great confidence,” Dadio Campbell said. “As Samantha is working her way back to one hundred percent, she is helping Maria as much as possible.”

Volk and sophomore Jet Manzi agree that senior leadership has been key, and that team chemistry and skill in general have played huge roles in the program’s victories as well.

“We have a classless system,” Volk said. “On the court, there are no freshmen, there are no seniors. Everyone is a volleyball player and everyone is able to give each other feedback and respect.”

After getting swept in straight sets by LaSalle in their season opener, the Leopards turned around and won four straight matches in the Crosstown Tournament. The most significant win came from their match against Marist on Saturday, when after trailing two games to zero, Lafayette came back to win three straight.

“We refer to this as the new team versus the old team,” Volk said. “During the third game we thought to ourselves, ‘do we want to give up and be done in three, or do we want to fight this out and try to win the game in five?’ The old Lafayette team would just roll over and die, but the new team would put in the extra time and win this game.”

The Leopards will continue to have their work cut out for them this season. Despite ranking second in the current Patriot League standings, they will face some tough competition down the road from both conference and non-conference games.

This weekend, the Leopards travel to Providence where they will play Fairleigh Dickinson University and St. Peter’s University, two teams they already beat in the Crosstown Tournament.

“This is a very good challenge for us,” Manzi said, “to comeback and prove that we’re a new team. It’s hard to do – to sweep a team twice – but I think that we can do it.”

This challenge will work to prepare the team for their tough Patriot League schedule, which begins on Sept. 23 at Lehigh.

“What we faced on Saturday was really a good start for us,” Dadio Campbell said. “We see what we need to do every day to be able to keep up with our Patriot League opponents. This team has a really competitive, yet positive spirit. They work hard, they play for each other and I think that will certainly benefit us when things get harder.”