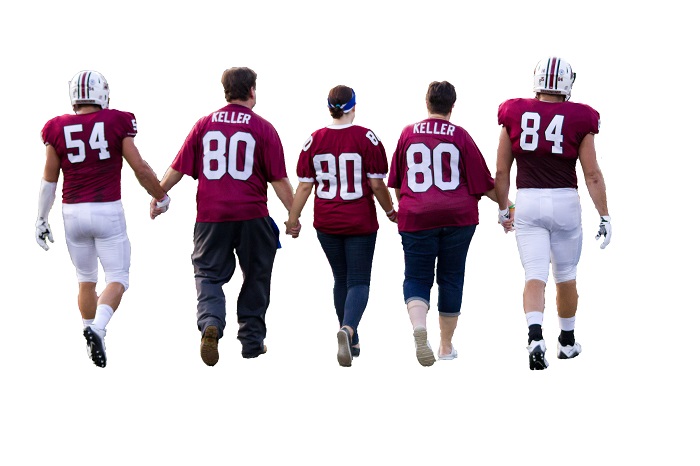 With an entire student section outfitted in special Roll Pards t-shirts and an entire team anxious to prove themselves in a new season, the Leopards kicked off the campaign Saturday with a poignant tribute to teammate Brian Keller ‘16 and many questions to be answered about who would replace the veteran presence of the Lafayette team of a year ago.

Early on, the Leopards seemingly carried the momentum before a more experienced William & Mary team took over and was simply too much for the young home team.

“We really embraced Brian’s spirit,” senior captain Bobby DePietro said. “To have his parents with us today and to see everyone representing him in the t-shirts with 80 on the back, we tried to use that to our advantage.”

The first answered question was who would get the call to start at QB. Head Coach Frank Tavani handed the ball to junior Blake Searfoss, a decision that seemed to surprise many as junior Drew Reed had more game experience and looked to be the clear choice.

After the game Tavani revealed that his QB decision was impacted by the suspension of Reed and three other players for a code of conduct violation. Tavani declined comment on the nature or length of the suspension, as well as the identity of the three other involved players.

After the Tribe jumped ahead 14-0, Searfoss kept the Leopards in the game with a 10 yard pass to DePietro for the senior tight end’s first career touchdown. Lafayette headed into halftime only down by a touchdown, but the Tribe’s offense took over in the second half, scoring 20 unanswered points.

The biggest task for Lafayette this season will be replacing the offensive production of Ross Scheuerman. Lafayette only had 96 rushing yards with sophomore Desean Brown and junior Kyle Mayfield producing 82 of those yards. The receiving corps bolstered the Lafayette offense with 243 total yards. Sophomores Matt Mrazek and Rocco Palumbo led the receiving charge with 125 yards between them.

For the defense, sophomore Brandon Bryant had the most impressive night with 13 tackles and a sack.

Another bright spot for Lafayette was its very young offensive line. Even with only one returning member and two true freshmen starting, the O-Line held strong and gave up no sacks during the game.

The Leopards’ overall youth was amplified in the second half when injuries forced players who had only seen time with the scout team in practice were thrust into the game.

“We had a couple freshmen in there that were probably deer in the headlights,” Tavani said.

Experience will continue to be a liability for the Leopards but the only way to improve upon a lack of experience is to gain it. The Leopards will look to leap into the win column when they travel to Delaware this weekend to take on another CAA team in the Blue Hens squad. Delaware dropped their first game 20-14 to Pioneer League Jacksonville University.