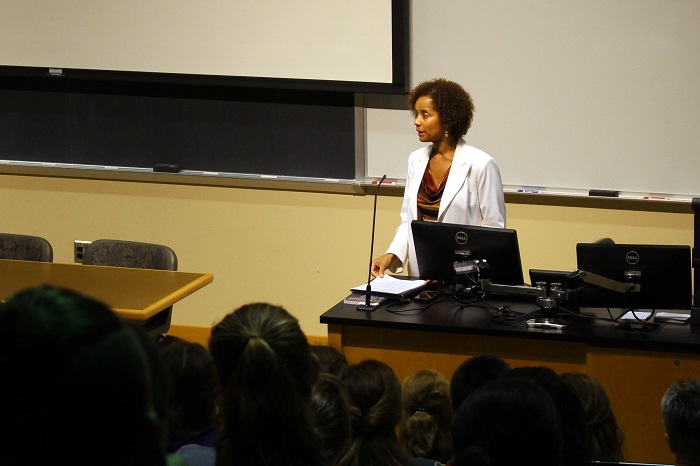 A civil rights activist gave a talk on Wednesday night about the power of religion in the current movement against racial injustice across the United States.

Author of Ferguson and Faith: Sparking Leadership and Awakening Community,

After interviewing more than two dozen members of the clergy and youth leaders involved in protests following the tragic death of Michael Brown, Gunning Francis realized that many people who engaged in this movement did so out of their understanding of what their faith calls them to do. This work is integral to their faith because fight against injustice is the core of various faiths.

The talk, organized by the Lafayette College Office of Intercultural Development, used the involvement of religious leaders in protests to emphasize the need of creative leaders from various groups to join this coalition against injustice faced by black bodies today, according to her.

“[The clergies involvement] reframes the narrative that the religious leader’s place is behind the pulpit, is behind the background, is inside the walls of faith community house of worship…to actually see them in the streets, it really takes the importance of how they are bringing their role as the faith leaders to the street,” Gunning Francis said.

Members of the audience raised questions about the perceived dichotomy between passive religion and radical activism.

Dean of Intercultural Development John Mcknight asked, “[Students are] disinterested in the idea of the Christian faith or really any faith guiding the radical activism. How do we get to the place where the people’s dismissiveness about the faith aspect of activism is not stifling their interest in race relation?”

In response, Gunning Francis noted the presence of a dominant narration of Christianity. This normative perception that Jesus wasn’t a radical revolutionary makes it difficult to inject an idea of activism, according to her. However, speaking up for those who are oppressed, seeking to change oppressive systems, albeit counter narrative, is still an expression of faith.

“A lot of people go to church, turn to their faith for strength so [religious leaders] are in agreement with their congregation, Sarah Talmade ’16 added. “They are being called to do that, I don’t think we can be passive anymore.”

Students also asked about Gunning Francis’s views on use of violence in the movement.

“MLK said that the riots are the language of the unheard,” Gunning Francis said. “When people feel like they have no other way in being, they feel like there is no hearing to be had, if they don’t do something that is perceived as outrageous to get the attention that is needed. My question is why have we constructed a society where this type of rioting is necessary?”

For example, she believes that the conversations about the racial issues on a national level wouldn’t be possible without the burning of gas station, QuikTrip in Ferguson.

It is important to realize that race isn’t just Ferguson issue, according to Gunning Francis.

“It’s incriminate for people of faith to start doing the kind of work of seeking to understand well what are the economic, educational disparities within our local communities,” she said.

Members of Lafayette community have conducted die-ins, brown bags and black out campaign to shed light on the racial issues. There were mixed reactions from alumni, faculties and students. Gunning Francis voiced the power of empathy to enlightened people who aren’t personally affected by the racial disparity.

According to Chaplain Alex Hendrickson, Office of Intercultural Development plans for the community to engage in a yearlong conversation about many ways to take action and work with others to create change for the betterment of the society through the #Activism: Leading Social Change series.