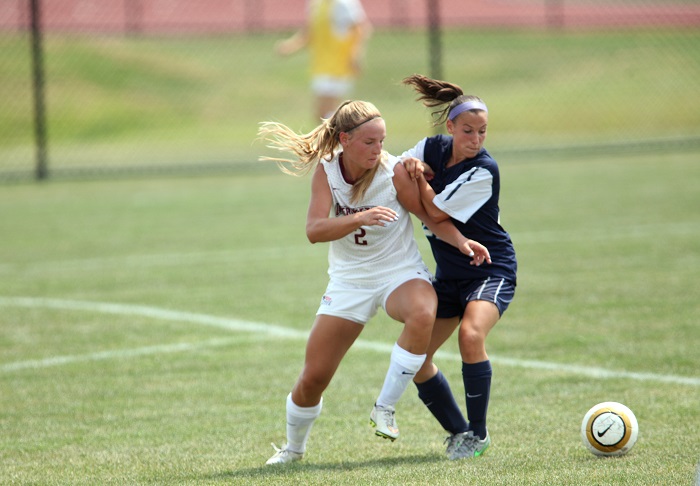 Lynskey ‘17 dribbles through a defender and looks to pass to a teammate. [Photo Courtesy of Athletic Communications]

Adam Nussbaum: Talk to me about the team’s big win on Sunday. You scored the first hat trick in 13 years for Lafayette Women’s Soccer.

Melissa Lynskey: It was an exciting win and great to continue the momentum from the first two games. We experienced a lot of success in the preseason and were able to keep playing at a high level. It was great to accomplish such a milestone but more importantly we’re playing really well as a team.

AN: What other sports have you played? Until when?

ML: I played basketball until ninth grade, track and field throughout high school, and danced until 10thgrade.

AN: When did you start playing soccer and how did you know it was right for you?

ML: I started playing when I was 5 or 6. When I was younger it wasn’t about the sport specifically, I’m very competitive, wanted to play, made friends, grew a love for the sport. Been such a big part of my life, can’t imagine life without it now

AN: Who has been the most influential figure throughout your soccer career?

ML:  My parents. They’ve always been the ones to support me, go to my games, and drive me to practice. There was a time in high school when I would have to travel out of state six weeks in a row. They were always willing to take time out of their weekends and made so many sacrifices to support my athletics.

AN: How has the team prepared for the upcoming season?

ML: A major part of our preparation was focusing on rest and recovery so we could always practice at 100 percent. We had one training session a day, the first time we’ve done this, which increased productivity, because we knew that we didn’t have to conserve energy for anything else. Now we’re used to playing at a high level and giving it our all when we’re on the field.

AN: What are the team’s goals going into the season?

ML: We set a goal to play our best for the first and last five minutes of every half. It helps set the tone for the entire half. Additionally, we want to make the Patriot League playoffs, have a winning record, and make a conscious effort to create the best team environment. This year’s team has been working together and focusing on the team goals rather than individual.

AN: How is the team morale after starting the season 2-0?

ML: The morale is very high and we started the season correctly. It’s important because we play a lot of good teams throughout the season and confidence will fuel us for success. At the same time it is early in the season so we are trying to be humble and focus on the rest of the season.

AN: What aspect of your game did you work on most in the offseason?

ML: Personally, I worked on a lot of technical things. There were some barriers blocking me from physical training but I worked on my ball skills, touches and shooting.

AN: What is your offseason workout regimen?

ML: We have a fitness workout packet to complete over the course of the summer, and everyone plays in an offseason league.

AN: What’s your most memorable soccer moment?

ML: Scoring a hat trick in college and winning the WPIAL Championship as a high school freshman.

AN: How do you manage your schoolwork alongside being a Division 1 Athlete?

ML: Time management and staying focused. One thing that’s been great with Lafayette is the professor’s support for athletics and our coaches for academics. There’s tremendous help from both directions and I could not ask for a better environment to excel in both.

AN: Do you have any pre-game rituals?

ML: I have a quote hanging up in my locker that I read and we tell other players why we trust them as a teammate.

ML: The beach but Disneyworld is a close second.