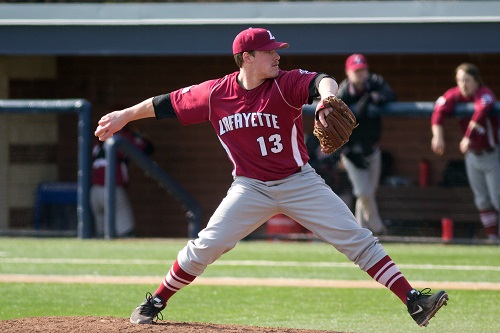 FFarina taking the mound for the Leopards in the spring of 2015. [Photo Courtesy of Athletic Communications]

Farina ‘15 is taking his talents to new heights

Last year’s graduating class saw a number of athletes prove their worth beyond the borders of the Lafayette campus, with four moving on to sign professional contracts.

One of the most notable additions to the professional sporting world was baseball’s Alex Farina, a pitcher who signed to play minor league baseball with the Milwaukee Brewers.

At 6’0 and a stocky 220 pounds, Farina showed plenty of promise from the beginning of his days at Lafayette.

“He had a lot of ability,” head baseball coach Joe Kinney said.“He pitched in a couple of different roles, starting and relief, but he was really in the bullpen for the last two years.He was a key piece to our bullpen, and last year our overall record might not have showed but we qualified for the playoffs, and we really made some strides and he was a really big part of that.”

When the MLB draft finally came around, however, Farina’s name was not called.  Friends and family gave him their condolences, as it seemed that the pitcher’s lifelong dream would not be realized.  His mother recommended that he attend an upcoming job fair and rely on his degree, not his slider, to bring in the checks.

But everything changed on June 6, when the former Lafayette pitcher felt his phone buzz.

“I received a call while I was working out with my personal trainer from the Milwaukee Brewers area scout,” Farina said. “He had gotten my contact information from a pre-draft workout I went to at Paramus Catholic High School a few weeks prior. He told me that even though I was not drafted, there was a chance that I could still sign with them as an undrafted free agent.”

Farina was told to expect a call later that week, but instead found himself on the phone twice more that same day, with a Brewers’ contract available before he sat down for dinner.

“I accepted the offer and immediately called all my friends and family,” Farina said.  “It was the happiest moment of my life, all my hard work had paid off. The following morning I was on a plane to Phoenix, Ariz. to play for their Rookie Level Affiliate in the Arizona League”

Farina burst onto the scene as an Arizona League Brewer, as well. Farina racked up an outstanding 22 strikeouts in just six games, and boasted a flawless ERA while in Phoenix. Within days, Farina was promoted to the Helena Brewers, Milwaukee’s Class A affiliate in Montana.

Up to this point, Farina has proved to be a solid addition to the Milwaukee franchise’s minor league affiliates, with a 1.05 WHIP (walks and hits per innings pitched) and a 1.95 ERA.

Hailing from New Canaan, Conn. Farina spent his summers pitching in various leagues in New England, including part of a summer as a member of the Cape Cod League’s Harwich Mariners. The road is long and treacherous to reach the pros, and the vast majority of collegiate players who walk that road never reach the end.

“From the day I first picked up a baseball to this day, my biggest supporters have been my grandmother and sister,” Farina said.  “I certainly had my struggles on the field, yet all the while they never stopped believing in me. Just knowing that the people you care about most are behind you through it all was more than enough to keep me on the correct path towards my goal.”

Only time will tell if that journey will include a big league contract with one of baseball’s professional clubs.

From Easton, Penn. to Helena, Mont. and everywhere in between, Farina’s journey as a man with a hard fastball, backdoor slider and a developing change up has only just begun.