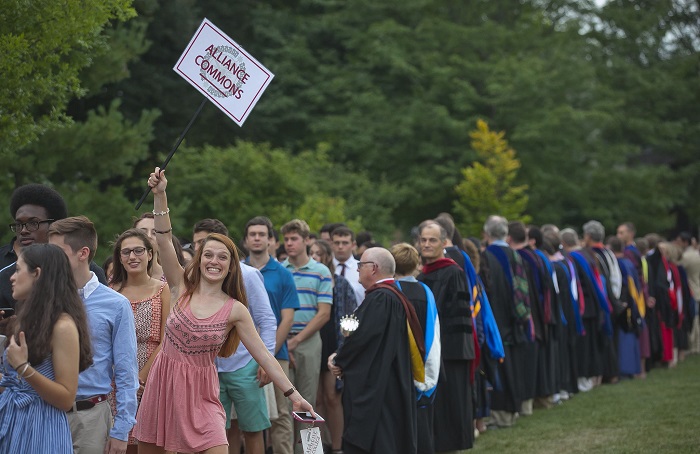 The class of 2019 gathers on the Quad for convocation. They are the largest class in the college’s recent memory. [Photo courtesy of Chuck Zovko, Communications Division ]

Flocks of students migrate back to campus every August, move into their residence halls and enroll in classes. But this year an unusually high number of students will be returning to College Hill.

The office of admissions planned to have 635 incoming students, similar to years past. The class of 2019, however, is 672 students.

“In my five years, we’ve really been on target,”MacDonald said. “This is the year that we missed the target.”

This year’s incoming class is 24 students larger than the class of 2018, which at the time was the largest class in Lafayette’s history.

In addition, only 14 Lafayette students are studying abroad this fall, compared to 55 students last fall. The number usually fluctuates within a range of 31 to 64, Director of International and Off-Campus Education Gisella Gisolo wrote in an email. More students on campus puts more pressure on academic programs and residence halls.

MacDonald said that he believes the greater number of enrolled students is due to Lafayette’s strengthening market position. The reasons that fewer students have gone abroad are less clear. Gisolo has noticed that it may coincide with large-scale trends.

“We are still not quite sure what might have driven our fall 2015 numbers down,”Gisolo wrote in an email, “but I can tell you that this follows a national trend away from semester-long study abroad experiences and more in favor of shorter-term study abroad.”

Gisolo wrote in an email that more students are enrolling in short-term programs, but also notes that major global events in the past year may have made students and families more concerned when going abroad.

The students her office surveyed, however, cited different motivations for staying on campus, she wrote, such as the ability to be more involved on campus and to have more or better access to housing options.

A higher than normal number of students on campus is also due to the college’s largest class size in at least 25 years, as far back as admissions records stretch.

The admissions office admitted 75 fewer students than last year, but the percentage of students that accepted offers was larger than expected. This statistic is called the yield, and it was two percent higher this year than last year.

This trend in Lafayette’s history contrasts with national trends. A report called “The State of College Admission”published by the National Association for College Admission Counseling showed that national yield rates have dropped sharply since 2000, implying that students are submitting more applications to colleges.

The college, however, has seen increases in applications, as well as their yield rate. MacDonald said that the reason more students are enrolling on fewer offers is the college’s changed market status due to the admissions team expanded efforts.

“We’ve doubled the number of states we’re planting the Lafayette flag in,”MacDonald said. “We’re doubling the number of countries we typically recruit from.”

Some things, however, have stayed the same or decreased. For example, total applications decreased from 7,796 last year to 7,465 this year.

“We’ve made the same number of high school visits,”MacDonald said. “We did the same amount of recruitment.”Admissions bought the same number of student’s email addresses from college search websites that survey students, according to MacDonald.

A variety of committees, including the enrollment planning committee and faculty and cabinet members, give the admissions team a target number of students for enrollment. The incoming class is 37 students larger than this year’s target.

Several methods are then used to determine how many to admit from the selected pool of applicants. One of these tools is a mathematical model that forecasts how many students will accept offers.

“Like any other traditional statistical model, our model uses past behavior to predict future behavior,”Associate Director of Institutional Research Simon Tonev wrote in an email.

Tonev would not disclose the measures of students that the model uses, because they are part of a model owned by the college, but he did write that the variables are “consistent with most people’s assumptions about the factors that could reasonably play a role in a student’s enrollment decision.”

The Department of Institutional Research intends to factor the new class into its model, but without changing the measures it uses.

“We don’t intend to change the model predictor variables,”Tonevwrote in an email, “however, we recalibrate the relative weighting assigned to those predictors every year to take into account the newest data we have available.”

MacDonald foresees that in the future, the college will have to admit fewer students.

“That’s a sign of strengthening market position, and that’s what we had to do last year,”he said.