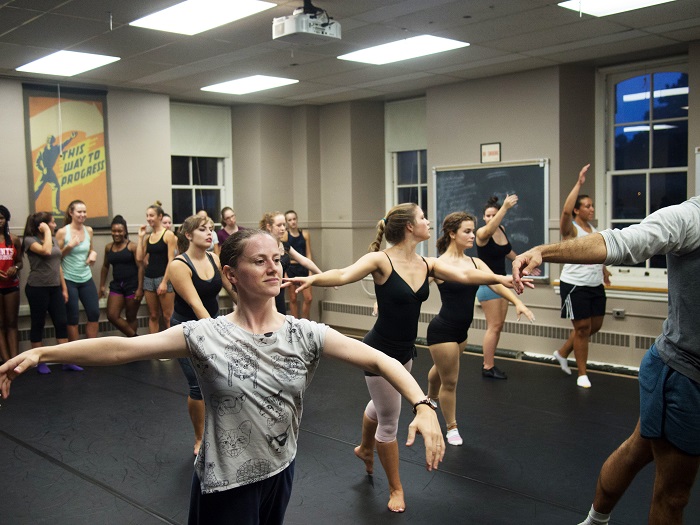 Choreographer Helen Simoneau and six other dancers are part of the Choreographers on Campus program, a dance program at Lafayette supported a $450,000 by The Andrew W. Mellon Foundation.

According to the official website, this program “brings choreographers to the Lehigh Valley to engage in collaborative artistic creation.”This evening,Simoneau’s group, Helen SimoneauDanse, will be performing what they have rehearsed during their weeklong residency on campus.

Many of Simoneau’s dances are up for interpretation, and this Friday evening’s performance is no exception.

There is no “clear message or story to get,” Simoneau said. “Our overarching theme is the caribou. They live a cyclical life, where they grow their antlers and then they fall off and [this cyclical nature] is reflected in the dance”.

“In fact,”Simoneauadded, “this dance is sort of a symbol of regeneration.”

However, despite the dances being interpreted differently by the members of the audience, the audience always feels the same after watching Simoneau’s dynamic performances.

“One of the things I’ve heard from the audience is that [my dances] make them want to move,” Simoneau said. “It makes me glad to know that the dances leave people feeling the presence of the music and the theme in their bodies.”

Simoneau, who is Québécois, received commissions from The Juilliard School, the American Dance Festival, the Bessie Schönberg Residency at The Yard, Springboard Danse Montréal and the Swiss International Coaching Project (SiWiC) in Zurich, according to her official website.

Her work has been presented at Dance Place in DC, Joyce SoHo in NYC, Tangente in Montréal, The Aoyama Round Theatre in Tokyo, the L.I.G. Art Hall Busan in South Korea, Jacob’s Pillow (Inside/Out), Movement Research at Judson Church, Athens International Dance Festival in Greece, and Danza Urbana in Bologna.