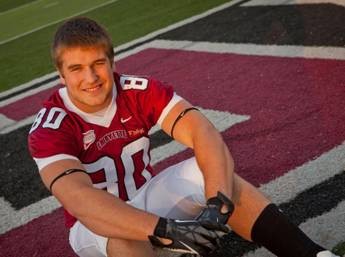 Photo of Brian Keller ’16, who passed away last week. Friends and family will celebrate his life today at his funeral at 11 a.m. at Atonement Lutheran Church in Wyomissing, Pa. Photo courtesy of Lafayette College.

Family and friends of Brian Keller ‘16 will gather today to celebrate the life of the 21-year-old, who passed away last Thursday morning.

The funeral service will take place at 11 a.m. at Atonement Lutheran Church in Wyomissing, Pa., across the river from Reading, where the family has roots. A burial will follow in Forest Hills Memorial Park.

Keller’s car veered off I-295 between his home in Somerdale, New Jersey and Easton at about six in the morning June 22. Family, friends, coaches and fellow players waited by his bedside in the hospital over the next two days while he was in an induced coma.

Keller, a Triton High School alumnus, was entering his final year at Lafayette as a mechanical engineering major. He played on the active roster for the Leopards football team and finished last fall with a 3.33 grade point average, earning him a place on the Patriot League Academic Honor Roll.

Built like a fullback, Keller played as a combo-H, also known as an H-back. Depending on the play, Keller would play either tight end or fullback.

He was known for his friendliness and determination to succeed on and off the field.

Even before attending Lafayette, Keller was recognized for his athletic talent in basketball and as a quarterback in football. It was through opportunities to attend state-wide ceremonies and camps that he met Nick Zataveski ’16, a pallbearer in the service today. They met junior year of high school and both accepted offers to study at Lafayette by coincidence.

“I guess it was just set in stone that we were going to be friends,” said Zataveski, an offensive tackle who played next to Keller. “I got to really know his family, and it started to be like we were actually family, like we were brothers…He was big on brotherhood.”

As a sophomore, he played 9 out of 11 games and all games last season. He had 24 receptions for 320 yards and three touchdowns last season.

Zataveski also said Keller helped a player off the field after an injury after not getting along with him in training.

“He was one of those people who tried to please every person he met,” Zataveski said. “It was unbelievable.”

“No matter what happened at practice, we left it on the field and we were brothers,” Bobby DePietro ’16 wrote in an email. He is also a tight end and pallbearer for the service.

“He was exactly what you want in a football player. He set his goals high and he’d run you over if you got in his way,” DePietro added.

“In his mechanical engineering classes, he was studious, generous, and affable, and well-liked by his peers,” Mechanical Engineering Department Head Jennifer Rossmann wrote in an email.

“My impression of Brian was that of determination and self-discipline combined with a free spirit and sense of whimsy,” associate professor and Keller’s advisor Karl Seeler wrote in an email. “In my estimate, most students who come to Lafayette planning to play football and study engineering find that they cannot do both and either change sports or, more commonly, change majors. Brian was an exception.”

Football Coach Frank Tavani, who will be delivering one of three eulogies at the service, said he saw the same determination in training when Brian played soccer for 90 minutes before a practice known for being particularly grueling.

Tavani, who has been part of the Lafayette coaching staff for 28 years, said he doesn’t have a playbook or game plan for what to do in this situation. Keller was on the active roster and was one of the 32 players participating in the first four-week session of the Leopards’ summer training schedule, which ended this week.

“Brian is one of those guys that is as close with everyone as he could be, he just loved having friends and wasn’t ever scared of making a new one,” his roommate Dan Dellovade ‘16 wrote in an email. “If you were in any trouble at all he would immediately stop what he was doing to help you out and would do it with a smile on his face because he knew he was helping a friend.”

After knowledge of Keller’s death reached the rest of the team, Tavani announced an optional training workout. All available players, including Tavani, took part.

Tavani is planning to add a sticker to the back of every player’s helmet with Keller’s number, 80, along with Tom Kirchoff ‘93 and Joe Bosik ‘58, who passed last semester. He also said that fellow students are planning to create and distribute a memorable bracelet for him.

“It’s not a matter of ‘We’re going to win it for Brian,’” Tavani said. “It’s about utilizing his spirit, his energy, his desire, his attitude and his work ethic to make us all better, so that we can try and achieve what he wanted very a much, a championship and another ring in his senior year season.”

“The outpouring of support over the last several days from friends, teammates, fellow student-athletes, coaches, faculty, staff, and other members of the Lafayette community is a testament to how greatly Brian will be missed,” Byerly wrote.

He is survived by his parents, Mark Keller and Susan Richards, his sisters Amy and Emily and his brother, Alex.