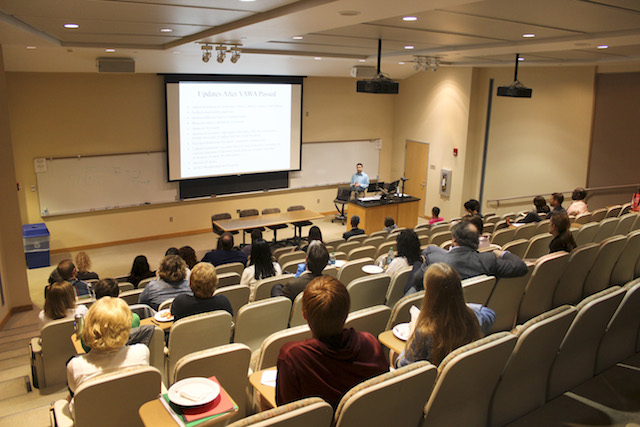 The Presidential Oversight Committee on Sexual Assault and Sexual Harassment held an open meeting on Wednesday to discuss proposed changes to the school’s sexual harassment policy.

The meeting was facilitated by Director of Student Development Greg Meyer and consisted of an overview of proposed changes followed by a question and answer session where faculty, students and staff debated these proposed changes.

“The way the open forum worked today was kind of like a macro level version of the sort of discussions we have ourselves in our more general meetings,” said Rob Sanchez ‘16, a student member of the committee. The forum provided feedback to the proposed changes, with a focus on language, and compared Lafayette to other institutions, according to Sanchez.

Proposed updates to the policy discussed in the meeting included replacing the word “intoxication” with “incapacitation,” including incapacitation related to alcohol or drug consumption, defining the word “force” and adding sexual exploitation as a punishable offense.

Many of the proposed changes are based on language used by ATIXA, the Association of Title IX Administrators, a non-profit association that Lafayette now works with.

The committee also plans to address consensual relationships between students and professors.

“The trend right now seems to be to make those [student-professor relationships] even more prohibitive,” Meyer said. “We are going to do a campus survey on this issue to really try and understand how we want that reflected.”

One of the questions to be addressed is whether or not student-professor relationships fit within the proposed sexual misconduct policy.

“Our policy before, specifically sexual assault, had some language that said public safety is solely empowered and is the only authority conducting investigation of these complaints,” Meyer said. “We are definitely looking to move away from that.”

The committee’s solution, for now, has been to add the word “typically” to the policy, giving them the freedom to start exploring alternatives to public safety investigation—including the use of outside investigators—a policy used at other universities.

Many of the other proposed changes were already happening in practice, so the purpose of the update was to create a clear policy that people could understand, according to Meyer.

“We’re always looking at what the policy says, and how do we translate that policy so that our community understands what it is that that policy is putting in place,” Meyer said.

Specificity in language is necessary so that the policy can be effective and easily understood by every member of the Lafayette community, Committee Chair and Professor Olga Duhl wrote in an email.

“Our concern is having to have it be understood by a non-lawyer, and at the same time, not over-generalized to the point where we’re losing things” said Director of Public Safety

Robert Sabattis, who attended the meeting.

One suggestion for making the policy more understandable was including examples as either part of the policy or as part of a companion document. This comes with its own set of limitations though, as some argue that using examples will limit people’s understanding of what these behaviors are, Meyer said.

The discussion that took place during the meeting was not rife with student involvement. There were fewer than ten students in attendance and no students asked questions.

“I would have loved to have more students there to get more feedback,” Sanchez said. “It speaks to the general culture of apathy that we have at Lafayette regarding these issues.”