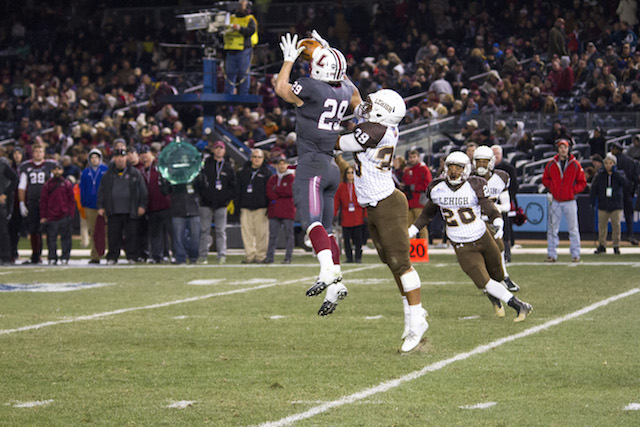 Ross Scheuerman will be taking his talents to the Steelers

After what has been an exciting two years for Lafayette Football—including a Patriot League Title in the 2013 season and a decisive victory over Lehigh in front of thousands at Yankee Stadium—things managed to get even better for one Leopard, as star running back Ross Scheuerman recently signed a free-agent contract with the Pittsburgh Steelers.

In spite of Scheuerman’s career as a running back, featuring 3,504 rushing yards for 31 career touchdowns, this type of professional acquisition is rare for Division I programs as small as Lafayette College.

While many Leopard sports fans are dropping their jaws at this type of news, graduating offensive lineman Luke Chiarolanzio isn’t surprised.

“He’s an athlete,” Chiarolanzio said. “If you run a 4.4 [40-yard dash] like he did in his pro day, then speed kills so you can put him anywhere. I think his experience as well, you know, being a four-year starter helps as well and his ability to come out of the backfield and run routs—that’s what really sets him apart from a lot of people.”

Scheuerman also finished in the top five for the 20 and 60-yard shuttle runs at the NFL combine and lead Lafayette’s receiving core this season with 57 grabs for 571 yards and three touchdowns.

Putting pen to paper with the Steelers, however, doesn’t guarantee Scheuerman a spot on the team, especially on the heels of Pittsburgh’s Le’Veon Bell and March signing of veteran running back DeAngelo Williams. In order to dress on Sundays, he will have to fight for his spot.

However, Chiarolanzio is confidant that based on Scheuerman’s distinguishing abilities, he would have a real shot at making the team.

“I think there’s a great chance,” Chiarolanzio said. “Speed kills…I think his ability to run and his ability to catch out of the backfield are going to be a big help.”

Whether he ends up making the team or not, signing a pro contract is a plus for more than just Scheuerman—it casts the Lafayette Football Program in an encouraging light for prospective recruits.

“It’s definitely going to help the program,” Chiarolanzio said. “I think it’s just getting our name out there to pro teams and it shows kids also that scouts do come look at Lafayette, they don’t just pass it by as being a small Division I school.”