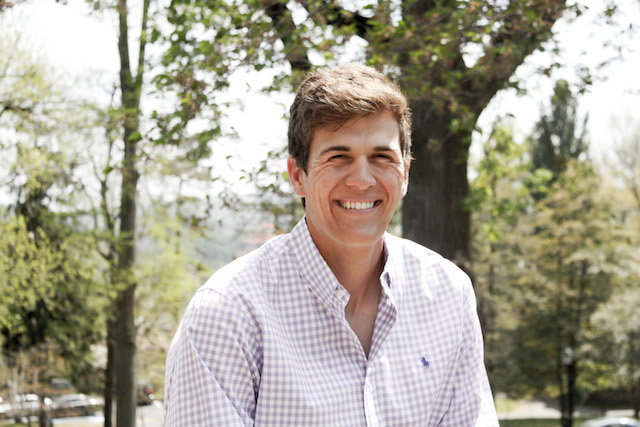 With almost his entire family calling the University of Virginia their scholastic home, Cory Spera ‘15 fully expected to follow their footsteps to Charlottesville, Va for college. But one trip to the center of Lafayette’s quad during high school drastically changed this path.

Instead of graduating as a UVA Cavalier like so many of his relatives before him, Spera’s road will take him directly to the center stage of Lafayette’s commencement activities as the class of 2015 Pepper Prize winner.

Spera was so sure about Lafayette that he refused to get out of the car when he and his mom visited Lehigh, who was also recruiting him for baseball, later that day.

The biology major from Lorton, Va. was known as just “the athlete” in high school, but Spera wanted that to change at Lafayette. He completed two summers of EXCEL research on denitrifying bacteria with professor Steve Mylon.

“Though we had some successes—a lot of failures too, which was such a good experience.” Spera said. “As frustrating as it was to keep going back everyday and tweaking different things, [it was] such a good learning experience for me.”

Spera was not able to ever get the data to fully cooperate, yet he is proud of establishing a protocol for the experiment that future EXCEL researchers can use.

Although his major and his research focus on the sciences, Spera cites his VAST course “Charles Darwin, Richard Wagner and the Uses and Abuses of 19th Century Science” taught by music professor Anthony Cummings as his favorite class.

The course’s partial focus on opera came as a complete shock to Spera, who thought it would concentrate entirely on evolution and convinced a few of his baseball teammates and basketball player Seth Hinrichs to take the course with him. Despite the shock of taking a class on opera, the entire group did very well, and, for Spera, it was the best experience of his academic career.

“[Professor Cummings] loved us and we loved him,” Spera said. “He nicknamed us the Brothers of Destruction…Only at Lafayette College can you be a baseball-playing bio major who has such a close relationship to a music professor and a man who is a world renowned aficionado of Italian renaissance.”

Besides playing varsity baseball, Spera was active on campus as a gateway ambassador, an athlete peer mentor and the Student Leadership Intern for the Lafayette Leadership Institute. He was also involved in the Alumni Relation Council, Oaks Leadership Academy, Class Commencement Gift and the Hoff Awards.

The son of a collegiate athlete and himself a gifted athlete from a young age, Spera had known he wanted to play college baseball since middle school.

“When I was little, and this is going to sound extreme, I didn’t have any toys. I just had balls,” Spera said. “It was always something with a ball.”

His baseball career at Lafayette was not the easiest as he battled injuries and a couple of mediocre seasons.

“The best part of being at this school… has been to see the growth of our team and of me personally,” Spera said. “I really learned a lot about myself because it would have been pretty easy to just hang it up after having such a bad [season].”

Before attending medical school, Spera will take a gap year to work for HeadFirst, a company specializing in summer camp experiences. Spera will work at the Washington Nationals’ youth baseball camp for the summer before moving into a small business fellowship at HeadFirst’s DC headquarters for the rest of the year. He is looking forward to picking up some marketing and sales experience that he did not get to explore while he was at Lafayette.

“I love baseball so much,” Spera said, who cites Cal Ripken Jr. and Stephen Strasburg as two of his favorite players. “I’m so excited to stay close to the game, and the Nationals are my favorite team.”

Just as with his baseball career, Spera has been decided on his career post-Lafayette from early in his life. After breaking his arm playing baseball and visiting an orthopedic surgeon, with whom he would later have an externship, Spera determined he would pursue orthopedic surgery or sports medicine.

“Here I am in 7th grade, devastated that I couldn’t play baseball, and this guy fixes me up so I can play baseball again,” he said. “I thought, ‘This guy’s the man.’ So ever since then that’s what I wanted to do.”

Though he is still preparing for his speech at commencement, Spera admits that it will be difficult to follow in Brad Bormann’s giant footsteps. Both Bormann, the 2014 Pepper Prize winner, and 2013’s winner Zachary Winthrop were mentors in one way or another for Spera during his time at Lafayette.

“To have those two guys who I hold in my head and heart as these two awesome, awesome guys that I looked up to so much,” Spera said. “To be the next one, to follow them, is pretty cool for me.”

Bormann and Winthrop proved to be quite the archetype for Cory. Both were pre-med biology majors who played varsity athletics, acted as peer mentors and chose to take gap years to pursue other interests before applying to medical school.

Spera is now forever labeled as the Lafayette ideal and, while he has left his mark on the school, he thinks the school has left a mark on him too.

“It’s just made me grow as a person so much from the athlete that I was in high school who was a smart guy who could barely write a coherent paper to someone who still self-identifies as an athlete but I’m so much more well-rounded, so much more well-educated on so many different topics,” Spera said. “I’ve realized that the people really do make the institution. For me, everyone here has been such a great influence.”

The Lafayette congratulates Cory on winning the Pepper Prize for most closely exemplifying the Lafayette ideal.