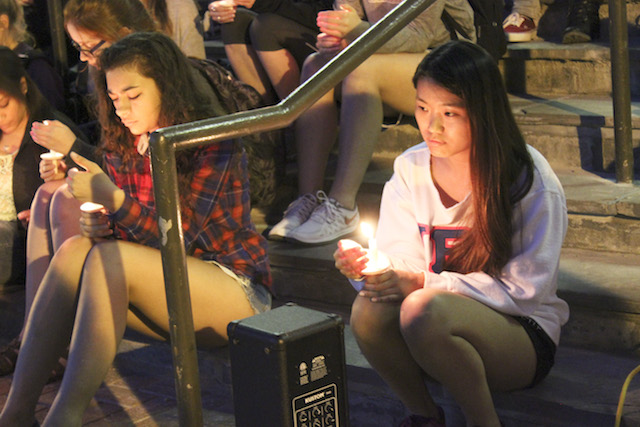 By Rachel Robertson ‘18 and William Gordon ‘17

The warm light of candles lit the faces of ninety students and faculty who gathered on the steps of Farinon Tuesday night for a vigil to express their feelings about the recent earthquake in Nepal. Some reports estimate that the earthquake has taken the lives of up to 5,500 people and left 11,000 injured.

Nepali students Nirupa Basnet ‘17 and Monika Niroula ‘17 spoke at the vigil, along with Rev. Alex Hendrickson.

They said the event was to commemorate those that died from the earthquake and to pray for the families of those affected.

Members of the crowd sat and stood on the stairs leading up to Farinon, overlooking electric candles that outlined a drawing of the country Nepal on the brick path with, “Pray for Nepal” drawn in chalk in the middle.

“The Nepali population at Lafayette and abroad have been trying to get in contact with their families back home,” Basnet said. “Because the communications have been lacking, it’s been really difficult. We really appreciate the support.”

Hendrickson encouraged students to share their thoughts on the disaster during an open mic session. Students with varied connections to Nepal came forward to voice their support and concern.

“When I saw the pictures online of various places in Kathmandu that had been just completely destroyed by the earthquake, it became so much more real to me and I realized how removed we are being here,” said a student who spent six weeks in Nepal during high school. “I can’t imagine the weight of it if that was my home.”

Students who had no connection to Nepal also expressed their wishes for Nepal and its recovery from this natural disaster.

“I think that I, as well as everyone else here, suffer due to this tragic event,” a student said. “I know in Haiti in 2010 there was massive earthquake that destroyed infrastructure…but it didn’t destroy the people. They’re resilient. I have faith that the Nepali people are the same way.”

Niroula is traveling to Nepal this summer to take part in aid efforts. She accepted donations from those at the vigil that she will give directly to villages in Nepal.

“I want to share with you the experience of not being able to talk to my parents for two days after the earthquake,” she said. “It was very hard and that is what made me make this decision of actually going to Nepal and doing something myself, because it’s not going to give my heart any rest if I do not do it.”