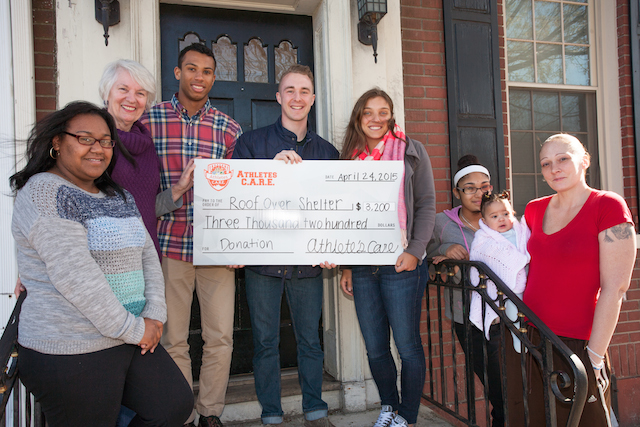 The group raised the money as part of an All-or-Nothing campaign, where a monetary goal is set, and if the target is not reached, all money is returned to the donors.

This was the second time that Athletes C.A.R.E. has donated money to the Roofover Shelter through an All-or-Nothing Campaign. Both times the organization has reached and exceeded its monetary goal.

Founded at Lafayette in March of 2012 by Alec Golini ‘14, Athletes C.A.R.E. is a community service organization where members of sports teams use their particular skills as athletes to give back to the greater community.

“We feel so grateful to be athletes at Lafayette, especially, so we just want to be able to give back what we’ve received,” said Chairman Laura Zito ’15, a mechanical engineer and a member of the women’s soccer team at Lafayette.

Since its founding in 2012, Athletes C.A.R.E. has not only grown at Lafayette, but has expanded to other schools across the country, as well.

The organization has also recently been in talks with Syracuse University and Dartmouth College about expanding its branches at each school.

“I never thought it would be as successful as it is,” said Golini, who is the founder and president of the organization. Golini was recently awarded the Newman Civic Fellows Award for civic engagement. The award is a national honor for student leaders who demonstrate investment in creating lasting change in their communities.

Athletes C.A.R.E. now runs its own website with a weekly blog and has brought in experienced professionals to help their non-profit grow.

As for the money recently donated to the Roofover Shelter, both Zito and Golini have no doubt that the shelter will put the money to good use.

According to Easton Area Neighborhood’s Executive Director Judy Matthewson the donated money will be used to create two play yards for the children in the shelter. The first play yard will serve as an outdoor childcare center for infants and toddlers. The second will be an area for gardening activities for older children, and provide a space for parents to grow vegetables and herbs.