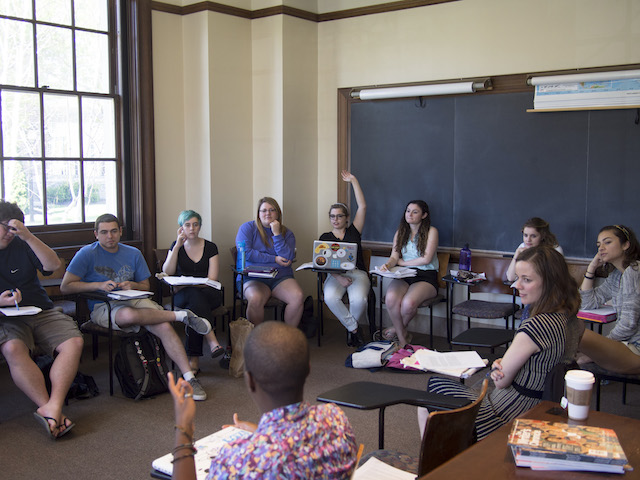 A recent report by the American Council of Trustees and Alumni revealed that only four out of 52 top universities require English majors to take an in-depth course on Shakespeare.

Lafayette falls into the larger category of schools with less stringent requirements–while both literature and writing concentrations must take a literary history course, there is no requirement to study Shakespeare specifically.

English major Gigi O’Hanlon ’16 said that, while she hasn’t personally studied Shakespeare at Lafayette, she doesn’t feel that her education has suffered because of it.

Within Lafayette’s English Department, a course on Shakespeare is typically offered once a year. Professor Ian Smith notes that the ACTA report misses a key point that he has seen to be the case at Lafayette: students are still willing to take Shakespeare classes even if they aren’t required, and often encounter the Bard in other courses.

“[The report] doesn’t seem to recognize is that enrollments in Shakespeare [courses] are up,” said Smith, who teaches a course on Shakespeare. “By not pointing that out, I think it’s misleading to the extent that it suggests that students are not reading Shakespeare anymore.”

“It should be required as [Shakespeare] was such a substantial part of literary history and set the foundation for many writers to come,” Silver said. “It was so new and innovative for that time, so I think it should be a core part of English majors to come.”

Silver said that she’d be in favor of a class dedicated to Shakespeare’s work.

“In today’s world, the question of the ‘relevant Shakespeare’ points to the kinds of issues that continue to be so important socially and in a working environment,” Smith said. “Questions of diversity, for example–think of what is happening in our country, the various riots or protests that are going on.”

As an example, Smith cited Shakespeare’s treatment of issues related to government in “Measure for Measure” or race and class in “Othello.”

“These questions that we grapple with now are issues that are raised by Shakespeare and raised in a productive and insightful way that continue to inform and engage our discussions,” Smith said.

President Alison Byerly, who is an English major from one of the four institutions in the study that required a course on Shakespeare, finds the study of Shakespeare to be beneficial for all English majors, but doesn’t have an opinion on whether it should be required.

“You can spend a lot of time arguing over what works should be read,” Byerly said. “Or you can simply focus on teaching students to be good readers of whatever text they encounter.”