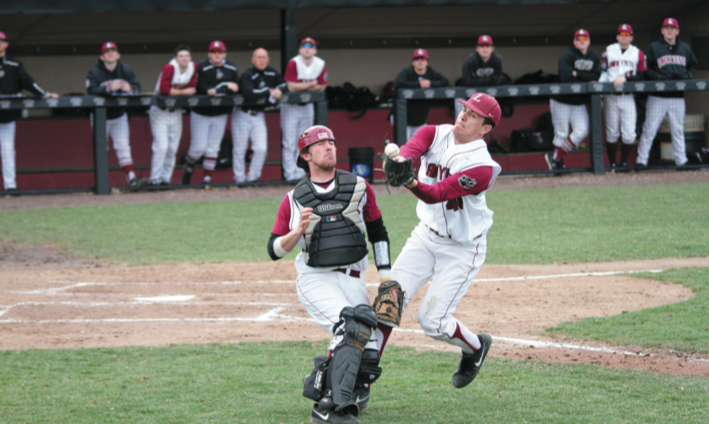 Seniors Spera and Parker Hills each run for a pop-up foul ball, with Spera making the grab. [Photo by Hana Isihara ‘17]

Despite a losing series to Lehigh, the baseball team is headed to the playoffs

For the first time since the 2012 season, the Leopards are headed to the Patriot League Playoffs.

Despite three losses to Lehigh this past weekend, Lafayette still managed to clinch a playoff berth due to losses from Bucknell and Army. The Leopards are locked in as the number four seed and will be playing Navy in Annapolis in two weeks.

But playoff experience is sparse. With just eight players returning from their 2012 playoff appearance, they were all freshman at the time. According to junior first baseman Campbell Lipe, however, the team is not concerned.

“We’re about to figure it all out and put it all together,” Lipe said. “I think we’re in a good spot going forward, in playoffs anyone can get hot so who knows what will happen.”

The last regular season series against Navy was exciting. Despite losing the series 3-1, two of the three losses were in extra innings, while the other was by just two runs.

The nature of the playoffs is different from the regular series. For one, the series is just three games, opposed to the four-game regular season format.

Also, the atmosphere is different. At the playoffs, anyone can win. Despite being to the playoffs just once, the senior class can still remember the thrill of the last time.

“Our freshman year we were up at Army who was 18-2 in league that season and we ended up gaining a 6-0 lead on them early on in the first game,” senior Tim Lazor said. “Unfortunately it went south from there but knowing that anything can happen and just making it to playoffs is a huge deal from us.”

The Leopards have five non-conference games remaining before the playoffs, the last being a three-game stand against NJIT.

“We’re going to treat that like the first playoff series, which will be our best chance at getting set for the next weekend,” senior Robbie Caliento said.

Aside from preparation, a big boost for the team in the playoffs will be the pitching staff, from the starters to the closers. The team’s three consistent starters in weekend series have been sophomore Dave Bednar, freshman John Cain and senior left-hander Toby Schwartz, who just garnered Patriot League Pitcher of the Week honors for his shutout against Lehigh this past weekend.

Schwartz, Bednar and Cain have been nothing but consistent this season, proving to be defensive weapons and helping the team win when the bats were cold.

“I think we know that our three starters for the three playoff games are going to throw really well as they’ve done all year, we just really need to work on out competing the other team to score more runs because we know runs are going to be what makes us win,” Lipe said.