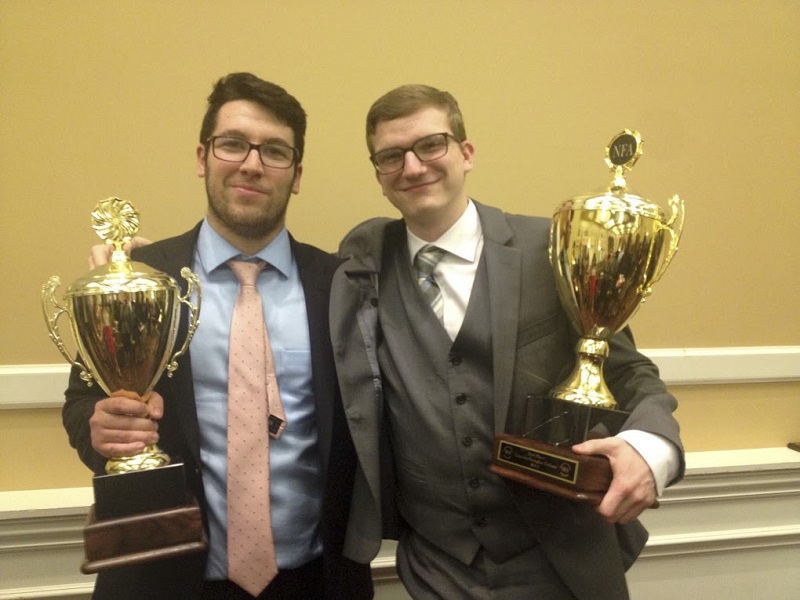 Some people hate to argue. Others will give up a whole week to do it.

The tournament lasted from April 15–20 and consisted of both speech and debate competitors.

Joe Rothschild ‘16 made it to the final round of the Lincoln-Douglas debate this year, where he lost by a 4-3 decision. It was his third time at the tournament. This year, he was abroad for the first semester, so he did not expect to do as well in the tournament as he did.

“I certainly didn’t expect to make it to finals,”Rothschild said. “And I certainly wasn’t expecting as competitive of a round.”

Ryan Monahan ‘15, who finished in the top four debaters, ended his collegiate debate career by advancing to the national semi-finals for the second time.

Both Rothschild and Monahan lost to the same debater from Western Kentucky University, who was the eventual champion.

“I’ve always tried to use nationals as a benchmark for my success and how I’ve grown as a debater,”Monahan said. “Ending my senior year making semifinals and losing to the debater who ended up winning the tournament…I really think it should my personal growth over the years.”

“Lafayette is such a small school that nobody knows about it,”team president Sharon Chen ‘15 said. “For the team it means a lot to be able to represent your school and get it out there.”

Each year the NFA announces a new debate topic. That topic is the prompt to which debaters address throughout the year. Most competitors maintain the same argument for the duration of the season while fine-tuning along the way, according to Rothschild. This year’s topic was the development of the moon.

For a strategic advantage, Monahan planned to switch up his argument if he had to face Western Kentucky. He abandoned his original proposal to create a lunar base on the moon for water extraction in favor of sending self-sustaining robots to the moon to extract minerals for the final round.

The speech and debate team helps each other throughout the season for the continual preparation the competition requires.

“The debate team is a team,”Vanessa Milan ‘16 said. “When one person goes deep into a round we all do. We’re all prepping out strategies. We’re all doing the research.”

With a streak of successful years with the season ending at nationals, the debate team is looking forward to what next year could entail.Western Kentucky is usually considered the favorite at speech and debate nationals, according to Rothschild, who referred to the school as “a machine.”Next year, Western Kentucky will lose a lot of their star debaters.

“There will be a rebuilding period in Lincoln-Douglas debate,”Rothschild said. “And hopefully I can capitalize on that in a way that will allow me to do well again.”