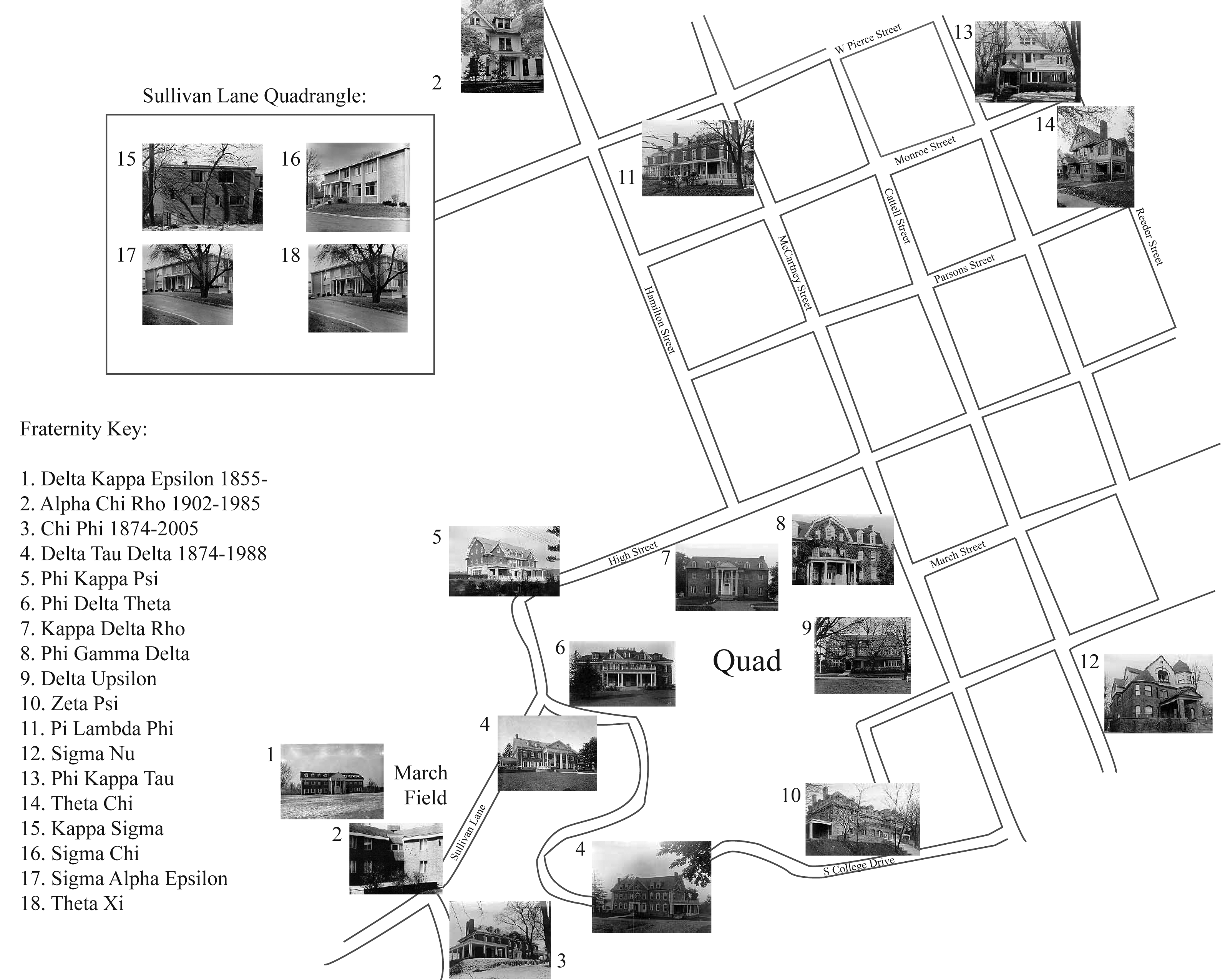 A map showing the locations of Greek houses at Lafayette. [Graphic by Mari Otto ‘17]

In honor of Greek Week: A walk down memory lane with Lafayette’s fraternal life

Many Lafayette students have heard the tales of fraternities past, of alumni’s glory days as one of the top party schools in the U.S. But how did Greek life on this campus go from 27 fraternities to three?

Early fraternity life at Lafayette dates back to 1832, six years after the founding of the college itself. Wishing to better their college experience, Advisor to Fraternities and Sororities Dan Ayala. Also, the students wanted to rebel against the college’s treatment of young men, students formed secret societies to renew ideals of nobility, dignity and service, according to “Lafayette College and the Greek Experience” written by Albert W. Gendebien.

The first two recognized chapters at the college were Phi Kappa Sigma, which appeared in 1853, and Delta Kappa Epsilon, which followed in 1855. Lafayette retaliated, requiring entering students to sign a pledge of agreement not to join secret societies. Few students abided by the pledge, however, and with the years to come Zeta Psi in 1858, Iota Alpha Kappa in 1863 and in 1867, Theta Delta Chi, and Sigma Chi all arrived on College Hill.

In the years 1866-67, the board of trustees tried to reinforce the pledge one more time, and soon after, it was dropped altogether. In the following year, Phi Kappa Psi and Upsilon Beta were welcomed on the Hill.

The school appealed the first petition to build a fraternity house on campus in 1891, marking the beginning of fraternity houses at Lafayette. The relationship between the school and the houses, however, was to remain one founded on rebellion, suspicion, and distrust for years to come, according to “Lafayette College and the Greek Experience.”

By 1940, a total of nineteen fraternities gained prominence on campus. All extracurricular activities emanated from the fraternities, who additionally served as the students’ sole decent living and dining quarters at Lafayette.

The 1960s mark the beginning of the end for Lafayette fraternities. With a renewed emphasis on student life happening nationwide, rushing delayed until sophomore year, the introduction of coeducation and new regulations at Lafayette, the fraternities’ reign on campus was coming to a close.

So was it the changing of the times then that triggered the domino downfall of Lafayette fraternities?

“The Greek organizations became somewhat insular and didn’t evolve and engage in a constructive way in the broader Lafayette community,” J.B. Reilly ’83, an alumnus of Delta Kappa Epsilon said.

In 1972, Theta Xi became the first fraternity to lose its recognition with the school, due to lack of membership setting in motion the slow demise of Greek life at Lafayette. By 1997, nine other fraternity chapters bid adieu to College Hill, several of them due to waning membership. In fact, a large majority of the 24 fraternities once present on campus were closed due to low membership and not disciplinary misconduct.

“For the Greek system to survive they must view and conduct themselves as being part of the Lafayette community,” Reilly said. “I think today’s Greek organizations understand this.”

It is now 2015 and only three fraternities remain. When asked if there could ever be no fraternities on campus, Ayala said the future of fraternities lies in their own hands.

In order to stay, fraternities must “…contribute something positive back to the college campus,” he said. “They can’t be seen as just a social organization. We are all founded based on a social premise, but we all have to do more and our founders expected of us to do more.”

The facts are there but the reasons are pure fiction. Fraternities have always been involved in the broader Lafayette Community and have contributed immeasurably in positive ways to Lafayette College.
Any discussion of the loss of fraternities at Lafayette College has to include the fundamental policies and restrictions placed on the Greek community by Lafayette College starting with the Alcohol patrols instituted in 1987. (see “the Lafayette 10/23/1987”)
These patrols were conducted by campus police raiding only Fraternities and continued until forced to stop them several years ago. The patrols led to the College keeping detailed “20 year dossiers” on each fraternity which were then used in judicial hearings to justify fraternity discipline and closings.

Arthur Rothkopf addressing the summit:
wanted to address the “miscommunications” between the School and the Greeks
“We are not out to get the Greeks, but we must advance the mission of the college”
Lafayette is changing and (Greeks) ”must adapt and evolve around these transformations”
Rothkopf assured the students that the school is not seeking to destroy Greeks.
Rothkopf stated that there was no plot to overthrow Sororities or Fraternities.
“the college does not have an obligation to maintain life-support systems for Fraternities and Sororities if they are determined to self destruct . Nor does the College have an obligation to ensure that Greek organizations thrive under any and all circumstances”
“…Greek organizations will be encouraged as long as they continue to compliment the college’s academic mission”
The President reiterated the fact that the Greeks need to expand by referring to the discriminatory practices that occurred during his college years.
Rothkopf foresees that the upcoming decade may call for particular adjustments on the part of the Greek system.
…the majority of high-school students will be female; one third… will be people of color; more…will come from single households. …increasing number..from abroad. …International students less likely to participate in Greek life.
….Greeks must stay alert to the growing economic, extracurricular and academic choices…..
…strict budgets may limit students……
….The college’s vast assortment of clubs and sports…..
…Lafayette boasts a demanding academic schedule….
“ in order to survive and prosper in this environment, Greek groups will need to play a different role, one in which they more directly complement, reinforce, and enhance the colleg’s broader educational mission”
…the school will not “compromise” their concentration on academics in order to provide for organizations that can interfere with a student’s dedication to work.
…Sororities and Fraternities can continue to play an important role in campus life with a willingness to grow and prosper in socially responsive ways.

Sophomore Rush – Created in the mid 90’s, this policy eliminated 25% of Fraternity membership.

Fraternity House takings – in 1993 the college reviewed all perpetual ground use agreements that fraternities operated under and concluded that these agreements could be broken. This eventually contributed to the “taking” of Phi Gam, Phi Delt, and Theta Delta Chi. The College currently controls KDR, forbids Chi Phi from recognition, has banned Zete for 5 years. With the destruction of the DU house in the late 80’s the College has removed 7 Fraternity buildings from any Fraternity use.

No new Fraternal organization has been permitted on Campus since Delta Upsilon returned in 1993.

This problem lay unsolved for a whole bunch of years, after having been left in the margins of a manuscript by the French
mathematician Pierre de Fermat https://math-problem-solver.com/ .
After getting used and proved to be a great approach, it has gained reputation all around the world.