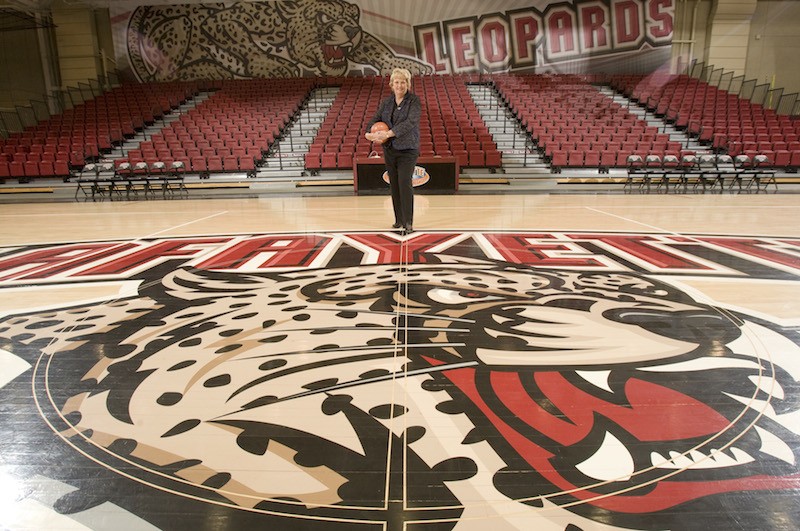 Grentz will be the sixth head coach in the history of the women’s basketball program. [Photo Courtesy of Athletic Communications]

Nolan left a gap that needed to be filled, and none other than former assistant coach Theresa Grentz was deemed worthy for the job.

Grentz is not short experience, with coaching spells at big schools such as Rutgers and Illinois. She has landed 671 wins up to this point, as well as 25 postseason appearances in 33 years as a head coach. Not to mention, she led the 1992 women’s Olympic team to a gold medal in Barcelona.

Rising Senior leader Jamie O’Hare had nothing but praise for the newly appointed Grentz.

“Coach T is not some random coach to us,” O’Hare said. “Not only was she our head assistant coach last year, but even as a freshman and sophomore she would come and give motivational talks to our team. I love this woman as a coach and a person.”

Grentz said she finally has a handle on what Lafayette is all about.

“It’s an absolute pleasure and delight that I have this opportunity,” said Grentz. “Having spent the last six months here, I felt like I almost was interviewing at that time and I have an idea about what Lafayette is. And I love it.”

Being familiar with the players and staff will allow Grentz to get to work as soon as possible.

“The good part is, you know the team, you know the support staff—you know people,” Grentz said. “So that’s done—I don’t have to go through that initiation period. And we can jump right in and go to work. Both feet, we’re going to work. We’re going recruiting. We’re coming back with some players.”

O’Hare said she is excited about Grentz’s new position.

“Mr. McCutcheon had our team come in and he surprised us with announcing her being the head coach,” O’Hare said. “We were so confused to have her walk in at first, but we all couldn’t have been happier. After not knowing whom our head coach was going to be for a while, I started to get impatient and worried.

“However, when she walked in it was a moment of relief,” she added. “We celebrated, she answered our questions, and talked to us for a little about what she expected from each of us for next year. We’ve stayed in touch with her since the season ended though so it wasn’t weird at all to see and speak with her.”

In spite of all the excitement, however, O’Hare knows that a lot will be expected from her as a senior leader in the program.

“During our post season I’ve already had to adjust to being a senior leader, and for next year I have a lot of expectations for myself and our team as a whole,” O’Hare said. “Coach T also expects a lot from me and to be able to play for her is a privilege and a once in a lifetime experience, so I will not disappoint. I hope to help the team win a Patriot League Championship as a leader and a player, and with Coach T and our assistants I know it’s possible.”