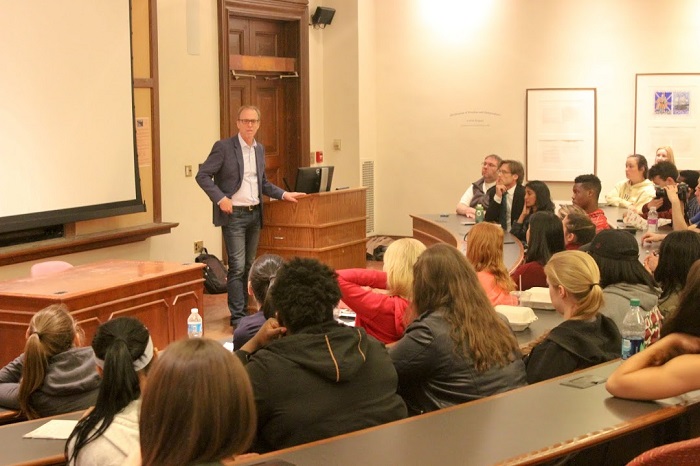 The recent conversation surrounding sexual assault at Lafayette was addressed more openly this past Tuesday following the screening of “The Hunting Ground,” an award-winning documentary focused on this epidemic on college campuses.

In his film, co-director Kirby Dick—who discussed his film following the screening—depicts the experiences of dozens of young men and women who were sexually assaulted during their college careers, and the taxing legal battles with institutions that followed.

The film discusses involving college athletics and fraternity life, and the hesitation of institutions to accuse such moneymaking sectors of their campus of rape or assault. Dick’s film addresses the controversy surrounding Jameis Winston, star quarterback at Florida State University and recent Heisman Trophy winner. In 2012, Winston was accused of rape by FSU student Erica Kinsman. But only within the past year did the institution administer a DNA test.

“The Hunting Ground” focuses on the activist efforts of two young women, Andrea Pino and Annie Clark, from the University of North Carolina at Chapel Hill who were assaulted. Both victims were initially scared to come forward after their attack, and even after doing so, received little to no support from their institution. Like so many of the women depicted, they were blamed for the incident.

Dick officially decided to create “The Hunting Ground” after screening his film, “The Invisible War” at Lafayette two years ago. This Oscar-nominated documentary addresses rape in the U.S Military and sparked conversation about rape on college campuses. Film and media studies professor, Nandini Sikand, encouraged Dick to pursue this topic.

“I get a sense that there’s a lot of desire to change and there’s a lot of resistance to change,” Dick said. “It’s really important that activists and survivors are involved in the reform efforts. The information is going to be so valuable.”

Little in the question and answer period dealt with the five women who came to The Lafayette within the last month and claimed they were sexually assaulted on campus. Instead, the discussion focused on the role and responsibilities of college presidents and campus security in dealing with this large spread, but largely unreported epidemic.

“It does make you think about the layers of bureaucracy that stand in the way of the stories being told,” President Allison Byerly said. “I would have to believe that every college president actually cares about their students as much as I do. There’s something in the steps that one has to go through that create an effect that I would have to believe isn’t intended.”

Byerly wrote in an email that Lafayette does not condone any favoritism on behalf of fraternities or athletes, as was claimed of other colleges in the film.

“It offended me to see that other colleges are hiding or covering up sexual assaults,” said Sergeant Anthony Gallagher, a public safety officer at Lafayette. “I’ve worked for two institutions now, and for Lafayette for the past two years, and I would never have thought that something like that would occur.”

Although there have never been any complaints that Lafayette administrators covered up any sexual assaults, the numbers do not tally with Dick’s estimates. According to the public safety annual report, between 2012 and 2013, there were only six reported sexual assaults.

In an email, Byerly said that it is the college president’s responsibility to ensure that “students who experience sexual assault are encouraged to file reports, and that they receive appropriate resources and support throughout the process.”

The screening of “The Hunting Ground” was made possible through the Film and Media Department’s partnership with Intercultural Development, and their collaborative mission to address certain social justice issues on campus.

“Sexual assault has always been a problem, and I think…that public interest is at an all time high,” said Dean of Intercultural Development John McKnight. “People need to understand this issue from a higher education perspective. The film does a really good job talking about the role that institutions play, but I do wonder about a greater accountability for men themselves.”

McKnight worries that “people, especially men who watch the film, might disassociate from this conversation,” due to the violent nature of the rapes described in the film. According to McKnight, less violent sexual assaults are more prevalent on college campuses, and offenders still need to be held accountable.