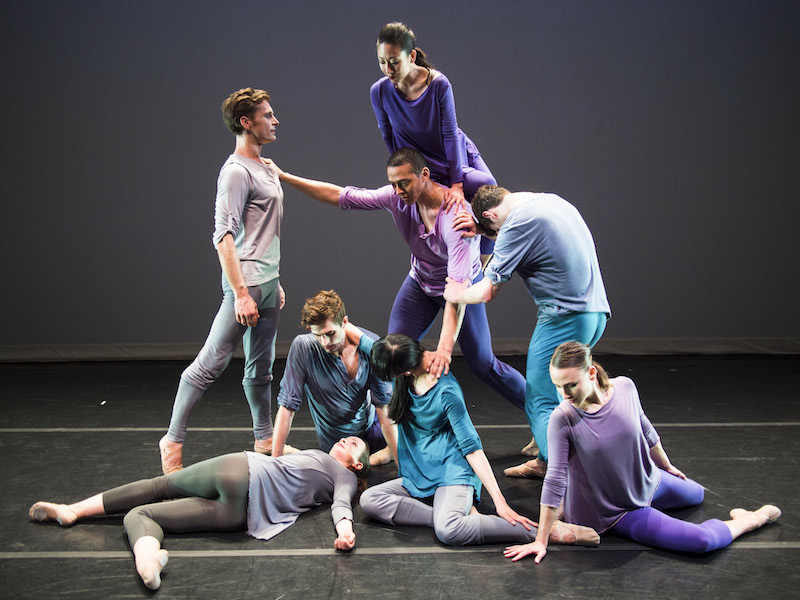 Choreographer Jessica Lang’s company performed with free-flowing contemporary dances with taut visual compositions this past week in Williams Center for the Arts. [Photo by Willem Ytsma ‘16]

The entire ensemble of dancers flurried on to stage for the opening act of the performance, entitled “Lines Cubed” (2012). Electronic music with a pounding beat reverberated the air as the poised dancers created an array of geometric angles and shapes with their bodies.

Jessica Lang Dance Company performed at the Williams Center for the Arts on Tuesday night. The second to the last installment of the Center’s “Performance Series” was headed by artistic director and choreographer Lang, who sought to “transform language of classical ballet into free-flowing contemporary dance.”

Each of the scenes within “Lines Cubed” were divided by distinct costume colors. The color of each dancer’s attire represented each of the primary colors. Three young women in yellow dresses danced to light, jubilant tune. A tragic love duo adorned in blue performed to a heartfelt, moving melody.

All of the dancers entered the stage once again for the final scene in the show’s first act. Lang’s creative flair for color shined as the dancers fit their bodies together with impeccable timing, as if they were Tetris cubes.

“‘Lines Cubed’ was my favorite part of the performance,” Joanna Harris ‘17 said. “It was a breathtaking experience to watch the dancers execute such innovative moves with ease.”

The latter half of the first half of the show embodied an ethereal, fantastical vibe much different than the abstract modern tone of the opening act. “Aria (Excerpt)” (2010) featured three women in orange garb elegantly trailing behind leaps and spins. The dancers looked like fire nymphs as their dresses fluttered against the movements of their graceful bodies.

The following act, “Among the Stars” (2010) was my favorite. A long, silky veil trailed behind Laura Mead and traversed the span of the entire stage. Partner Clifton Brown pursued her with movements exuding an air of romantic grace. The magical dreamscape elicited a pure, playful, and overall dreamy vibe.

Kimura looked like a bride surrounded by sheer white fabric cascading from her bodice and covering the entire stage floor. Her expressive hand gestures and torso movements produced a ripple effect within the surrounding fabric, emanating an elemental water vibe.

“She looked like a mermaid bride,” said Lila Silver ‘17.

The final act within the performance, “Scape” (2014) opened similarly to “Lines Cubed.” A bell tolled ominously as the dancers frantically took stage. The tall heights and defining composure each performer accomplished upon executing various lifts exuded an aura of complexity comparable to spiders weaving webs.

As the most recent edition to Lang’s show, “Scape” certainly exhibited the dancers’ raw performance ability and talent in exposing the body’s feats of nature.

I have been to several dance performances at the Williams Center and the Jessica Lang Performance was my favorite yet. Lang did an exemplary job choosing songs and costumes to compliment her troop’s out-of-this-world finesse.