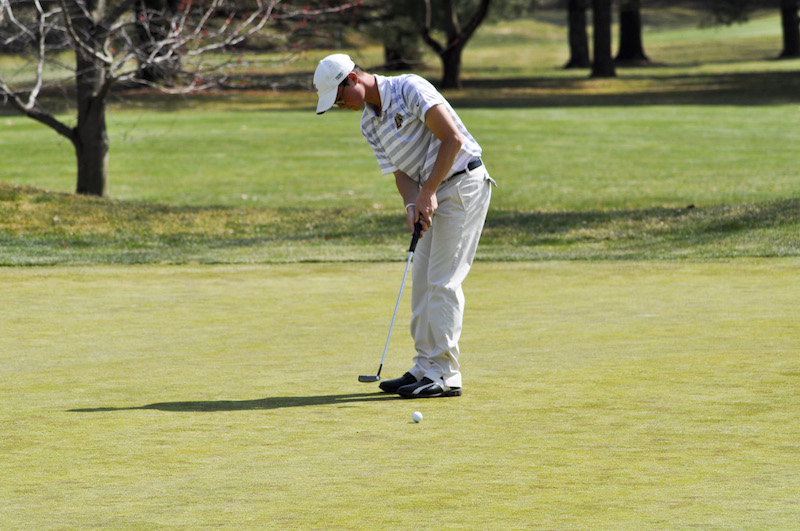 The team atmosphere takes a turn for the better

In the last year, the PGA Tour has ushered in a new generation of young talent. Rory McIlroy, Rickie Fowler and Jordan Spieth have taken the golfing word by storm, none of whom are older than 26.

Like the PGA tour, Lafayette’s golf team also has young talent. Since the fall of 2013, the Lafayette golf team has welcomed four new golfers to College Hill who have had no trouble finding success. In the fall of 2013 and again in 2014, freshmen claimed the Bucknell Invitational, sophomores Jared Mactas and freshman Art Griffin.

As the young talent seems to be fueling the golf team, the veteran players are keeping pace. Senior Bob Dyer went toe-to-toe with Griffin at the Wildcat invitational this spring, finishing at four over par through two rounds of play. At the Coca-Cola Invitational just two weeks ago, senior Mike Zausmer finished just two strokes behind sophomore Jared Mactas and one behind freshman Sam Aronoff.

To Zausmer, the healthy competition can only help the team and him improve.

“Having Jared and Art on the team has been good for me,” Zausmer said. “They’re obviously two of the better players on the team and its good competition.”

But as much as Zausmer is learning from competing with Griffin and Zausmer, he also understands his role as a leader on the team.

“I was told this summer that the best thing to do is lead by example,” Zausmer said. “If they come to me for advice, I try to give it to them.”

Despite an early spring plagued by snow and cold weather, the Leopards had success as a team and on an individual level. To kick off the spring season, the team saw individual finishes at 12th and 16th place in the 95-player field. The Leopards also took fifth place as a team at the Coca-Cola Invitational and had individual finished at fifth and 12th place.

The team is not letting the weather dictate their season. According to Zausmer, the weather only helped the team camaraderie improve.

“We’re doing a lot of things together,” Zausmer said. “That’s something new. When we get to practice, we’re out there working on our games and trying to help each other. We spent the time that wasn’t able to be on the golf course developing a bond between us 11 golfers on campus.”

The upcoming tournament venue, Stonewall Country Club, will be new to most of the players on the team. Despite being just 6,717 yards from the back tee markers, the Old Course boasts three par 3s at least 190 yards in length. To Zausmer, the key to success lies in.

“That’s where I find the scoring happens,” Zausmer said. “Preparing for Stonewall, whether it’s a hard, tough, or long course, everybody has to play the same golf course. I think that scoring comes from 100 yards and in. When you play your best golf, your putting well and you got to be good with your wedges.”

Coming off of a disappointing 10th place finish on Tuesday at the Peacock Invitational, the team will look to rebound. The team will seek to continue to find their mid-season stride this weekend. As much as golf is a team sport, it’s an individual sport. And for Zausmer, his goal has remained the same since day one.

“I’ve always had a goal of winning a college golf tournament,” Zausmer said. “You got to take everything in stride and be able to build off of experiences. You try to use everything to your advantage. To rebound you have to learn from your mistakes.”