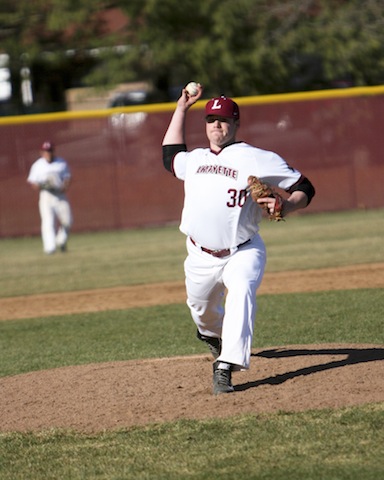 Lafayette sweeps the Black Knights to move up the league ranks

Last weekend, the baseball team swept another Patriot League team in a four-game series for the first time in eight years. The team was Army and, before last weekend, the senior class was 0-14 against them.

The Leopards were coming off the other end of a sweep, losing all four games to Holy Cross the week before.

“This past weekend was really a team effort,” head coach Joe Kinney said. “Our starting pitchers had two wins and our bullpen contributed with two wins and two saves. We had tremendous production throughout our lineup.”

The Leopards’ offense, usually seen as their weakness, looked like their strong suit this past weekend. Lafayette scored 35 runs in four games.

Junior Mike Coniglio garnered Patriot League Player of the Week honors, totaling ten hits, six runs and four RBIs against Army. Coniglio, a center fielder and leadoff hitter, led the way offensively against the Crusaders, and made a few outstanding catches in the outfield.

“Early on in the season we were getting behind in counts and not swinging at fastballs, at least that was true for me,” Coniglio said. “This weekend we wanted to be more aggressive and attack fastballs in the zone early in the count and it worked out for us.”

Junior Campbell Lipe also hit his first career home run this past weekend. According to sophomore Alex Woinski, the reason for their hot bats was weekly batting practice.

“Our practices throughout the week were tailored to a lot of situational hitting—a part of our game that was really poor up until this weekend,” Woinski said.

The Leopards also had more versatility within the lineup for this four-game series. Although unorthodox, the lineup changed from game to game.

“All of us have the same role in the lineup and that’s just to do whatever the situation calls for,” Woinski said.

The Leopards pitching continued to showcase its star power with sophomore Dave Bednar leading the team to a series-opening win by a score of 4-2. Bednar picked up the win with help from left-handed relief pitcher, junior Ryan Callanan.

Junior Connor McMahon also recorded a save in game three of the series, clinching a 8-7 win for the Leopards, striking out the final batter with a runner on second.

“Most of us are used to high pressure situations,” McMahon said. “You pitch better because you’re focusing on what you’re doing pitch-by-pitch. The starting pitchers gave us a good chance to win and the relief pitchers did a good job of holding the leads we had.”

The Leopards will face off against Navy this weekend. Navy’s ace pitcher Luke Gillingham has the most strikeouts in the country currently, posting games with 16, 14 and 15 strikeouts. He has even been named National Pitcher of the Week twice.

Coach Kinney is looking to apply the same practice strategy as last week.

“We will prepare for Navy the same way we prepared for Army, by practicing hard, attacking our two midweek games and preparing for a demanding series on the road by putting our players in as many challenging situations as we can,” he said.