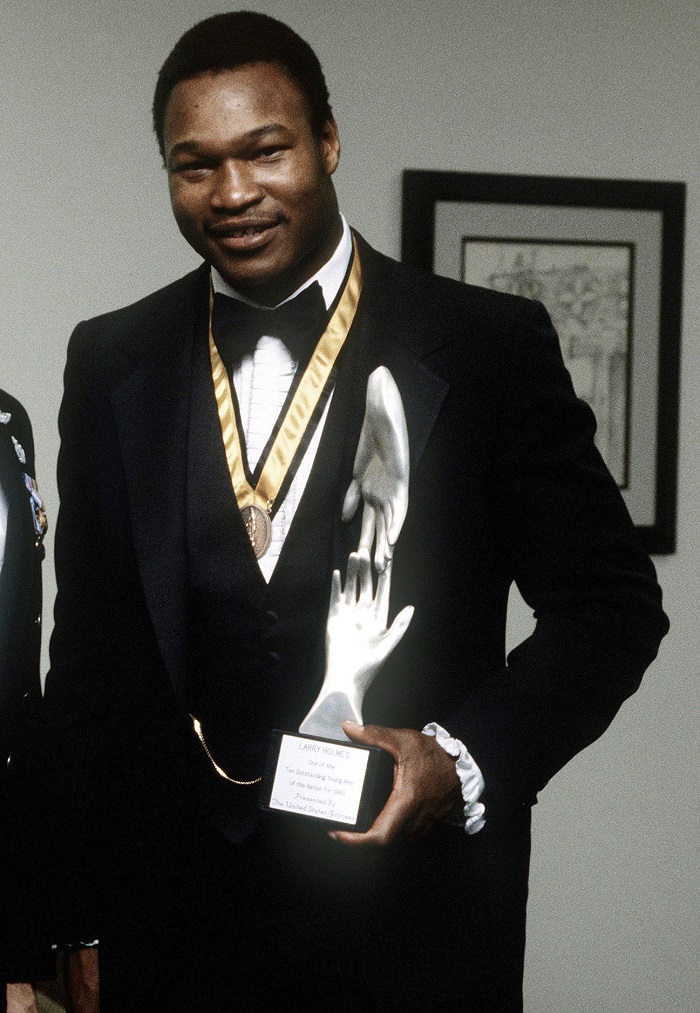 At the age of 12, boxing was the least of his worries.

“I had some problems in school with some teachers and some kids and they thought I was bad,” Larry Holmes said. “[The school] said,‘Get out or get thrown out,’ so I got out. I worked at a car wash and shined shoes there. I did what I could to bring money to the family.”

Just down the hill from Lafayette lives Easton’s greatest son. He didn’t graduate seventh grade, let alone college. But he used what he had—brains, brute force and perseverance—to become the Easton Assassin, the former heavyweight champion of the world.

His multimillion-dollarcareer began with fooling around. In his free time, Holmes went to a local boxing club in Easton to learn how to fight. No one ever won the fights—they always ended in a draw—no matter if one person was knocked down or beat up worse than the other.

“You don’t really plan out your life when your young, you just do things, whatever comes natural,” said Holmes, in an interview with The Lafayette. “You do what everyone else is doing. You want to get in there and fit right in. I never thought it was going to turn out the way it did.”

As a young man, he befriended Ernie Butler, a man from New York whosaw great potential in Holmes. Butler offered Holmes a chance to train in New York with amateurs of higher status than those locally. It was Butler that convinced Holmes to train for the 1972 Olympic team.

“I was scared,” he said.  “I said, ‘I’m not going to New York, those guys are tough.’ But I went, and that’s mainly how I stayed on course to be a boxer. He was the first guy to believe in me. He told me I was going to be a champion. He would spend money to take me back and forth to New York, buy me sandwiches when I got hungry, boxing gloves and shoes. He didn’t have a lot of money, but he took what little money he had and gave it to me.”

In training for the Olympics, Holmes was able to meet a boxing legend that would change his life for forever: Muhammad Ali.

“Ali wanted a sparring partner in the area and it was only me,” Holmes said. “I was good enough to last with Ali and he kept using me. I kept training with him and then he started paying me $500 a week. It was a great experience. It was a piece of cake.”

Nearby, in Deer Lake, Pa., Ali had built his own gym and training facility. Holmes no longer had to make the two-hour trip to the Bronx to train. Boxing with Ali almost everyday made Holmes soon to be one of the best heavyweight fighters in the world.

Little did Ali know at that time, that Holmes was learning from his every move.

“I learned how to jab working with Muhammad and I got to be competing with his jab…he didn’t know I was doing it,” Holmes said. “I would try to outdo him. When he would throw a jab, I would throw a jab, and then I would start landing first, and harder. He was more experienced with ring knowledge, but I would quickly catch onto that.”

After training beside Ali for four years, Holmes went on his own. It didn’t take long for him to be successful. In June 1978, Holmes was given to the opportunity to fight Ken Norton. Norton, the heavyweight champion at the time, was only the second fighter besides Joe Frazier to defeat Ali. After 15 grueling rounds, Holmes claimed the belt in a split decision.

After that, Holmes made 20 successful title defenses, defeating Earnie Shavers, Leon Spinks and Gerry Cooney along the way.Holmes even defeated his longtime mentor, Ali.

“It was bittersweet because he was my friend,” Holmes said. “He gave me a job, fed me, let me shower in his place, maids came in and cleaned my room…you cant hate a guy like that. When I fought Ali, he called me everything in the book. I was shocked to hear him say that, but if I let him get to me, he would have been the heavyweight champ of the world.”

Ali, a notorious trash talker, wasn’t able to shake Holmes outside of the ring, or in it for that matter.  Holmes won in the tenth round after Ali’s corner threw in the towel.Holmes eventually lost the title to Michael Spinks in 1985 after a 15-round bout.

“When they said, ‘the new heavyweight champion of the world,’” said Holmes, referring to his least favorite boxing memory. “I thought I won.They didn’t want me to break the record [Rocky Marciano’s 49-0]. It pissed me off…that hurt me the most.”

After the Michael Spinks fight, Holmes decided to retire from the sport. But just seven months after their first fight, Holmes returned to the ring for a chance to regain his title.Holmes lost in a split decision, but continued to fight on and off for 16 more years, compiling 21 more wins.

The reason for Holmes longevity: money.

“That’s all boxing was to me, making money,” Holmes said. “People said, ‘Why are you fighting, you’realready rich?’ But I wanted more money. I wasn’t getting hurt. I was fighting guys that weren’t beating me. I didn’t fight because I loved the sport; I fought for the money.  I’m a seventh grade dropout but tell everyone I have a PHD in common sense. I’m a boxing executive on my level and I think I’m pretty good.”

Holmes said he had no regrets about his career. Fortunately, he never sustained any severe injuries over the span of his career. A broken thumb and swollen hand was all Holmes left in the ring. Some boxers, like Ali, suffer from severe head trauma as a result of their boxing careers.

“I don’t want to see him [Ali],” said Holmes. “I want to remember him like I remember him.  Maybe I forget things here and there but I don’t think I’m bad. A lot of guys didn’t take as many punches and they are worse off than I am.”

Holmes is said by many to be one of the most underrated fighters of all time. But he doesn’t let these opinions govern his legacy. With a record of 69-6 and eight-year title defense, Holmes deserves to be recognized with the best of all time.

Unlike many successful athletes that move to warmer pastures, Holmes has remained in Easton for his entire life. He has developed parts of Larry Holmes Drive, and contributed money to local youth centers and the Boys and Girls Club. He has no intention of leaving any time soon.

In 1973 before Holmes’ first professional fight in Scranton, Pa., his trainer, Richie Giachetti, gave him the nickname—Easton Assassin. The nickname would stick, and be well fitting for one of the greatest of all time.