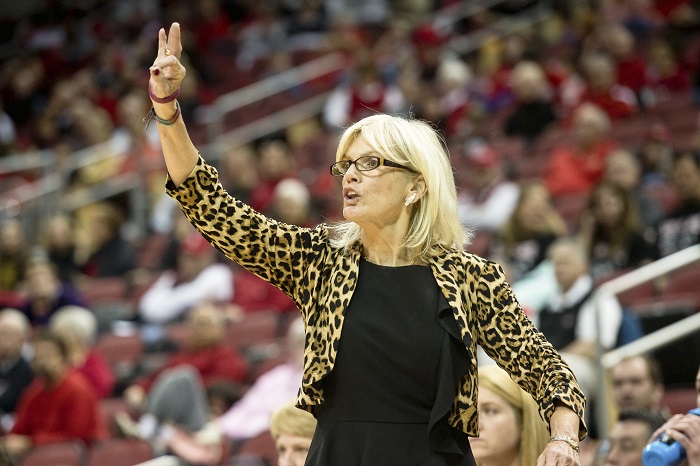 Coach Nolan on the sidelines calling a play for the women’s basketball team. [Photo Courtesy of Athletic Communications ]

After five years at the helm of the Lafayette women’s basketball team, head coach Dianne Nolan has announced her retirement.

Nolan’s most impressive feat as a head coach in her 38 years, was posting a 100 percent graduation rate. On all accounts, coach Nolan understood what it meant to be a student-athlete. She also understood the vast amount of opportunities student-athletes have at Lafayette. For this reason, she encouraged her players, time permitting, to involve themselves in other activities around campus.

“She really encouraged us to be a part of other things, other than just being a basketball player,” senior Maddie Peabody said.

“I think that Lafayette has so much to offer and where [the players] time could permit it, I thought it was a good experience for them to experience as much as they could,” coach Nolan added.

The senior point-guard also said that Coach Nolan will be missed for her sense of humor. She recalls one practice where the coach showed up wearing a football helmet, in reference to an event in the previous day where she almost collided with a player running down the court. She continued to wear the helmet and act normally. Peabody said that Nolan was never afraid to laugh.

“We are more respected throughout the Patriot League and also throughout the basketball world,” Nolan said. “I think the program is growing and during our tenure, we took it to higher places and I expect it to just keep growing and growing.”

“She really changed the culture of the team to be one that expected to win,” Peabody said. “Although our record doesn’t show that, I think that the mindset of Lafayette women’s basketball isn’t as the joke of the Patriot League anymore.”

Prior to Lafayette, coach Nolan spent time as the head coach at both St. Francis and Fairfield. In her own playing career, Nolan was a four-sport-athlete at Glassboro State University.

In her time at Lafayette, she compiled a record of 58-93 overall, and a record of 22-42 in the Patriot League. This past winter was the finale of her 41-year coaching career. In her 38 years in the head coach position at three different colleges, coach Nolan held a lifetime record of 575-509. This achievement ranks her in the top 40 all-time in the Division I ranks.

This past winter, the team finished 14-17 and 6-12 within the Patriot League. After qualifying for the Patriot League tournament and defeating Loyola in the first round, the Leopards surrendered to top-seeded American University. An impressive season for a team that was not considered a contender in years past.

Despite her success in transforming the program, coach Nolan feels ready to retire. Nolan looks forward to tackling some of the tasks on her bucket list. This will include traveling and potentially working with the elderly. In addition, she may consider working in student development—a role she seems to be made for.

Leaving Lafayette with only positive things to say about the community and college, coach Nolan said that she will still be following Lafayette and looks forward to seeing the successes Leopard programs “hang some banners.”

“I feel humbled and honored to have been a part of the Lafayette community,” Nolan said. “It is such a vibrant, intelligent, awesome community, and I’ve been very privileged to work with so many wonderful student-athletes, assistant coaches, staff. I will always treasure my time here.”