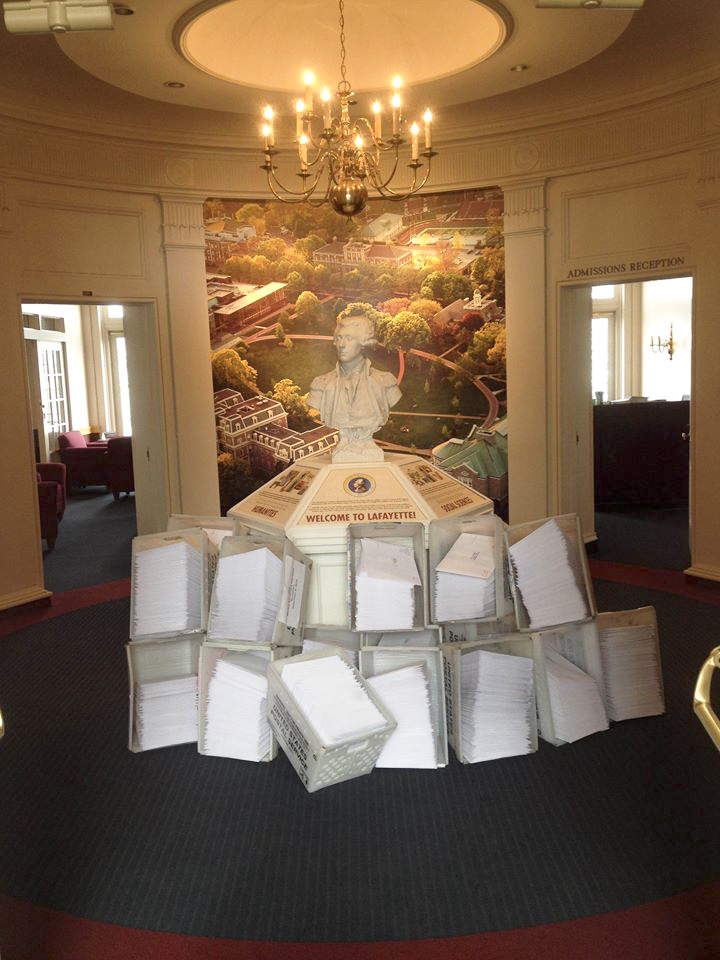 Acceptance letters for the class of 2019. [[Photo courtesy of Lafayette Communications ]]

After acceptance letters for the class of 2019 were mailed out, the Lafayette community witnessed an emotional encounter via Facebook as Senior Assistant Director of Admissions Taaha Mohamedali hand delivered an acceptance letter to a Texas high school senior.

Brenda Del Rio of Dallas was one of the 2,252 applicants admitted to the class of 2019, which according to Dean of Admissions Matt Hyde, yielded an acceptance rate of 30 percent.

Mohamedali flew cross-country to deliver the acceptance letter as a means to inspire and energize potential students.

“I think it’s really emblematic of what we’re trying to do in the admissions world,” Mohamedali said. “Part of our job is to get these kids excited.”

Del Rio, in tears, verbally accepted the offer to be admitted to the class of 2019.

The personal visit came at a time when the school is experiencing a drop in applicants from the previous year’s figures. This year, 7,455 prospective students applied to Lafayette, roughly 400 less applicants than last year.

Mohamedali pointed out that although admissions numbers were slightly lower than last year, the class of 2019 yielded the second highest number of applicants in the college’s history.

The diversity of the class outnumbered any previous classes at Lafayette due to admissions’ attempts to reach out to under-represented populations, such as students of socio-economic diversity, first generation college students, students of color and international students, according to Mohamedali.

Last year, Lafayette College signed a partnership with a charter high school umbrella for students passionate about social justice, known as Uplift Education. Del Rio will join the class of 2019 through this organization. The community-based organization, similar to Posse, seeks to present college as a possibility to students of under-represented populations.

According to Hyde the group of accepted students that will yield the class of 2019 is composed of students representing 78 countries and 44 U.S. states, Puerto Rico and Washington D.C . The accepted pool is composed of 24.3 percent domestic and international students of color.

As a senior interviewer for admissions, Danielle Moran ‘15 had the opportunity to personally meet close to 100 prospective students for the Class of 2019 beyond the application.

“All students are passionate about something, whether it is equestrian riding or traveling or playing soccer,” Moran said.“Admissions looks for students that will be engaged and active members of our campus, academically, socially and through extra-curriculars.”

For Del Rio, one of her passions, Frank Sinatra, dovetailed with her passion for Lafayette College. As Mohamedali handed over her letter told her“you will be flying to the moon.”