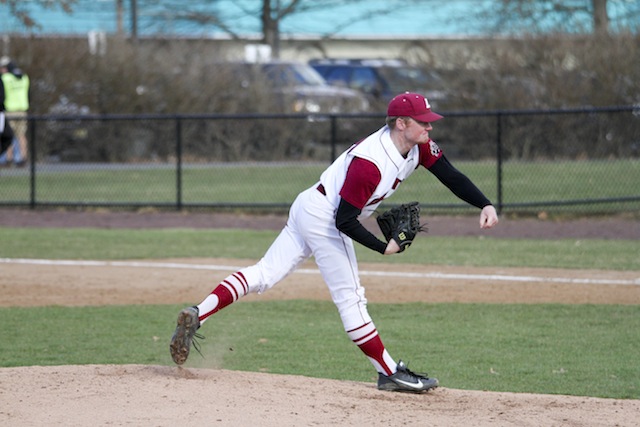 Senior Toby Schwartz takes the mount for the Leopards, instead of starting at first base. [Photos by Hana Isihara ‘17]

The battle heats up between two unlikely competitors

The Leopards are in an unusual predicament—not enough room in the starting lineup for so many quality hitters. With this much talent, the question for the Lafayette baseball team is who belongs where on the field.

Earlier in the preseason, seniors Tim Lazor and Toby Schwartz, junior Campbell Lipe and sophomore Alex Woinski all were competing for three spots—designated hitter, left field and first base. Lazor secured the DH spot so far and Woinski has locked up left.

There is nothing set in stone for who’s on first between Schwartz and Lipe. But the battle for first is between a true infielder and a pitcher.

Schwartz played first base in high school, but ended up being recruited to Lafayette for his pitching.

“When I came to college I decided to go one way, but over the next three years I cajoled and nudged my coaches to let me do it [play first] and I was moderately successful and it’s kind of stuck ever since,” Schwartz said.

Schwartz got his first big break when Lipe was forced to sit out the remainder of last year’s season with a back injury. The left-handed pitcher was quickly successful, getting hits in his first couple of plate appearances, and hitting his first career home run in a crucial tied ballgame.

Although he had success at first base, Schwartz is still a key pitcher for the Leopard’s defense. He may have to switch back and forth this season, even in back-to-back games.

“Going from pitching to first base is a totally different mindset, it’s difficult to balance the two,” Schwartz said. “When you’re a pitcher you’re stuck in a mindset of what to do next, which pitch you want to use for which hitter. [Hitting] you’re just going in there and attacking. You’re wiping away any thought.”

Schwartz enjoys aspects of both positions. When in the game, pitchers dictate what happens and the game evolves around them. But, when not pitching, one can feel left out of the game.

Unlike other fielding positions, first base is different—it constantly sees action, whether it is holding runners or getting ground balls.

Schwartz has stiff competition from Lipe, a talented junior who has made significant strides over the past few years.

“Any competition on any team is healthy,” Lipe said. “It makes both players better—I push Toby and Toby pushes me. I just want to win and I know it’s the same for him. We want to put the team in the right direction and do everything we can to get the wins.”

Despite the competition, Lipe is admires Schwartz’s skill set.

“I think it’s really impressive what he’s able to do,” Lipe said. “He didn’t hit or play the field for three years and if I took that kind of time off as a primary hitter I don’t think I could do what he does now.”

The relationships on and off the field between the players remain healthy, hopefully resulting in a winning season. The Leopards open with their first Patriot League series against Holy Cross at home this weekend.