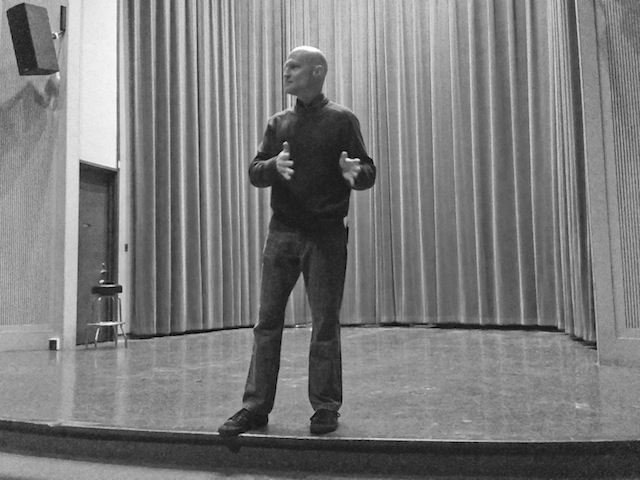 Scott Dikker discusses his career with The Onion. [Photo by Elizabeth Lucy ‘15]

The Onion founder shares his experiences, wisdom, and laughs

Scott Dikkers, the founding editor of the popular news satire website, The Onion, came to Lafayette’s campus this past Wednesday evening as the class of 2015’s senior speaker.

Dikkers discussed the troubling chain of events that led him to comedic writing. He grew up in a devout Baptist family in Madison, Wisconsin, and battled depression for many years due to school bullies and his parents’ divorce.

“Comedy became an outlook for me,” Dikkers said. “I learned that it’s a wonderful coping mechanism. Bullies: if you can make them laugh, then they don’t beat you up.”

Dikkers began his career in comics and, after establishing himself as a local celebrity in Madison, became the editor of The Onion. He then ended up dropping out of college and buying it from his two friends.

He shared stories of the newspaper’s progress after his purchase and of the various “misfit” co-workers he hired along the way. He believed, from personal experience, that the people hiding the most pain usually made the best satire writers.

“We did not search high and low,” said Dikkers. “We just searched low. Dropouts, shut-ins, disaffected dishwashers, liquor store clerks: these were our A-players. They were bitter, smart, had a lot to say, and had no prospects.”

Over the years, The Onion grew in popularity, despite a couple legal setbacks that Dikkers found more entertaining than troublesome. He managed to avoid destructive lawsuits and continued to stun the journalism community with his brash, unfiltered, satirical news.

During Dikkers tenure as owner of The Onion, his focus was never on monetary value. The Onion did receive some ad revenue that helped pay its writers, but that left little money for Dikkers himself. He was actually homeless at one point, which he ironically found to be “the happiest time of [his] life.”

“I was totally living my mission,” said Dikkers. “I was doing comedy and I was succeeding at it. It didn’t matter that I didn’t have any money.”

Since then, the paper has grown significantly in value due to the business-oriented nature of its new owners. Dikkers is still involved in the paper, but on a smaller level. He spends most of his time working on new projects.

Each year, members of the Senior Year Experience Committee gather to select a speaker with vast knowledge, experience and success in their particular field, whom they believe will inspire the senior class as graduation approaches, said Director of Student Developement Kristin Cothran.

“There was a surprising amount of real-life advice,” said Zach Leff, ’16 of the speech. “It’s nice to hear that from someone who has actually done it. You can be successful and follow your passion.”

“Scott Dikkers is proof,” Sperber said. “That unlikely does not mean improbable.”