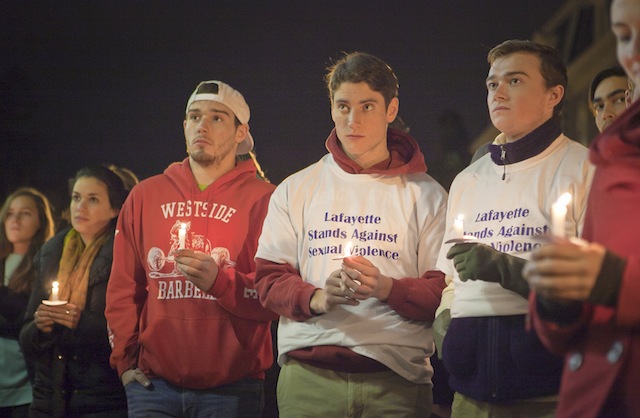 Students, faculty, and staff gathered at various locations around campus to participate in a silent march ending at the Quad in Take Back the Night 2014 [Photo courtesy of Chuck Zovko, Communications Division]

Campus partners with city to stand against sexual violence

Take Back the Night, an event hosted by the Association of Lafayette Feminists, invited students to march alongside Easton citizens in an initiative to rise against sexual assault and violence in our community.

Started the late 1960s with the mission of ending sexual violence, Take Back the Night aims to raise awareness through marches and rallies all over the United States and Europe. With a theory proclaiming “no one should fear the night, or day,” the idea behind this nationwide initiative rose out of the deaths of women who were killed during the nighttime. The intent of Take Back the Night is to take back the world that should be a safer place for women.

Vice President of the Association of Lafayette Feminists Robert Sanchez said issues of sexual assault and violence are prevalent at Lafayette.

“We are not as big of a university as Penn State or UPenn so in terms of numbers it’s not going to be as large,” Sanchez said. “But in terms of the impact and the presence of those issues, definitely just as valid and applicable to Lafayette’s campus.”

While this is not the first year of Take Back the Night, the involvement of the City of Easton is a new aspect of the rally.

“The idea was to create a kind of interconnectivity,” Sanchez said. “To bridge the gap between Lafayette and Easton and also to address those issues [of violence] which perhaps might not be as addressed in the City of Easton as they are here.”

And in terms of the city’s response, the event has received a positive response from the city, which went as far as to waive the fee usually necessary for holding events in Center Square. Even the mayor, Sal Panto, will be present at the event.

“They have been 100 percent behind us” Sanchez said.

Take Back the Night will be Monday, March 30 at 7:30 p.m. Students will march from the Lafayette College Quad and Eastonians will march from the State Theatre at 453 Northampton St., the Easton side of the Easton-Phillipsburg free bridge and the McDonald’s at South Third St. and Larry Holmes Drive according to the Express Times.