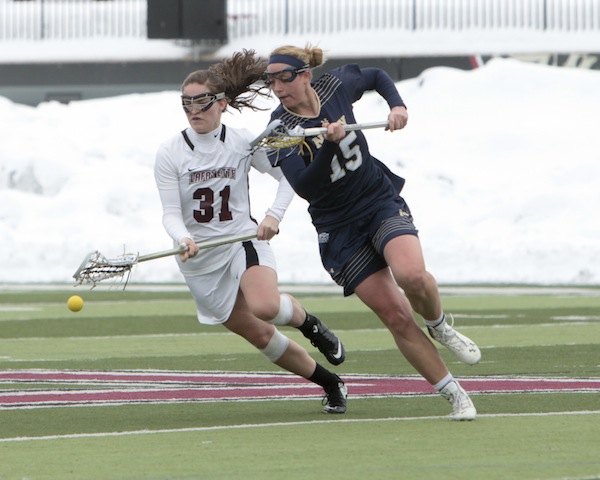 Kristen Wilhelmsen battles for a loose ball against their opponent, Navy. [Photo courtesy of Athletic Commubnications]

Looking at the snow still on the ground, one wouldn’t think that both the men’s and women’s lacrosse teams are just past the midseason mark.

The women have played 10 games, compiling a record of 2-8. The men, on the other hand, have played eight games, winning one and surrendering seven.

Each team found their first halves of the season to be an adjustment and learning period for the younger players. With nearly 10 games of experience under their belts, they are looking to turn the direction of their seasons around. They are in the position to do just that.

The women’s schedule was difficult from the beginning. Early in the season, the Leopards had to face Patriot League powerhouse teams in Navy and Loyola. This slow start has put them at a sub .500 record and a 1-3 in-league record. Their victories have come against UC Davis and Holy Cross.

Their most recent game, this past Saturday, was one of those victories. The Leopards got a much needed conference win against Holy Cross to keep them in the running for a spot in the Patriot League Tournament. With remaining league games against American, Bucknell, Boston University, and Colgate, wins against three of these teams will secure the team a spot in the tournament.

“Now that we have Navy and Loyola out of the way, our next three games are pretty evenly matched,” sophomore Kirsten Wilhelmsen said.

At this point, the previous 10 games have given the Leopard women a chance to gain experience playing as a unit. With the freshmen adjusting to a new style of play at the collegiate level, the team feels as though they are maturing.

“We’re a very young team, but I think since the beginning of this season, we’re showing less of our youth,” sophomore Amanda Case said. “We’re maturing and making less mistakes.”

Wilhelmsen specifically gave accolades to freshmen goalie Anna Raymond. The young keeper has anchored the defense so far this season.

The men’s team has had a similar experience. At 0-5 in the Patriot League, the men are looking to turn around the direction of the season. Their sole win came in their first game of the season against Wagner. But like the women, the men have gained experience and are in a position to make a late season push.

“There are a lot of guys who didn’t have a lot of experience coming into the season and they took the opportunity and made the best of it,” senior Cory Scheuerle said.

There are three remaining league games against Holy Cross, Bucknell and Lehigh. Three victories will leave the team in the running to be one of the six teams moving into the post season.

Besides striving towards the playoffs, there is another goal that the team is looking to achieve. Since the spring of 2013, when the lacrosse team began to play on Fisher Field, the men’s lacrosse team has not has a home victory. For the four seniors, they will have less than a month to do so.

“We’ve never had an official win on the beautiful Fisher Field, so that’s definitely a team goal,” Scheuerle said.

So, although the snow is just beginning to melt away on College Hill, both the men and women’s lacrosse teams are working hard to put together a second-half push and compete for a post-season spot and end their spring seasons on a high note.