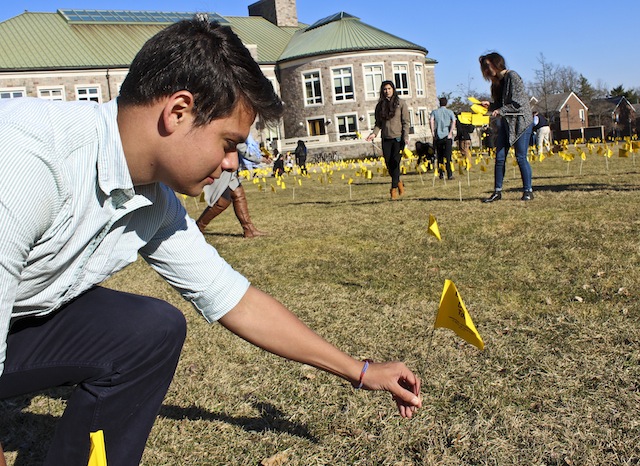 Eddie Andujar ‘15 plants flag on the Quad as part of HSL’s campaign to raise awareness for Migrant Deaths along the US- Mexico Border. [Photo by Christina Shaman ‘16]

Students were met with an unexpected sight last Tuesday afternoon: 2500 yellow flags covering a section of the Quad.

The flags signify every migrant death that occurred on the US-Mexico border since 1999. The siting of the flags acted as the kick-start to Lafayette’s Immigration Week.

“Putting 2500 flags up on the quad will pique people’s interest,” said Eddie Andújar ’15, a high-ranking member of the Hispanic Society of Lafayette.

HSL hosts the annual week which consists of several events addressing immigration and its implications.

“One is to educate the Latino community about what issues are facing the Latin-American community,” Andújar said. “The second is to build a support network for students on our campus that are interested in these [issues] that do identify as Latinos or identify as allies, and bring them together. The third is to get students more involved in future events”.

Event attendee Sarah Shoop ‘17 was moved by the humanitarian implications raised by the event.

“This many people shouldn’t be dying for any reason, and the fact that they’re immigrants searching for better rights in the US, it really hits home,” Shoop said.

HSL, Better Together, the Office of Spiritual and Religious Life, Interfaith Council and Kaleidoscope hope to continue the discussion of morality and immigration sparked by Tuesday’s event on Thursday, with a discussion titled, “The Arizona Desert: Morality and Mortality”.

Not only does the event hope to raise the moral conundrum brought on by the sheer amount of deaths in the Sonoran desert of Arizona, but it also hopes to address political reactions to immigration.

Thursday’s discussion addresses the intersection of politics and morality, as this struggle is due in part to policy.

“The interesting thing with immigration is that it’s really a mash-up of federal laws and state enforcement,” adviser of Kaleidoscope Rev. Alex Hendrickson said. “There’s a lot of leeway in how states enforce federal law, and it really makes a difference, whether someone enters in Juarez or in Nogales.”

Other discussions will focus on the issues faced by Latino-Americans and Latin Americans. Andújar hopes the event will educate students on struggles Latinos face.

“[The US Government] didn’t realize how desperate people are to escape their situations and obtain a better quality of life,” he said.

Two immigration-centered film screenings “Adelante” and Professor Sikand’s “One, If By Land” will round out HSL offerings for Immigration Week.

In addition, Saturday’s “Bridging the Gap” conference will bring Immigration Week full-circle with the culminating event “Bridging the Gap: Experiencing the Journey”, in which groups follow different paths representing the paths taken by migrants. Participants will then remove the flags from the Quad.

“My goal has been to inform people who aren’t informed about the topic, and to really bring the topic back into discussion,” Public Relations Chair of HSL Natalia Nevarez ’17 said.