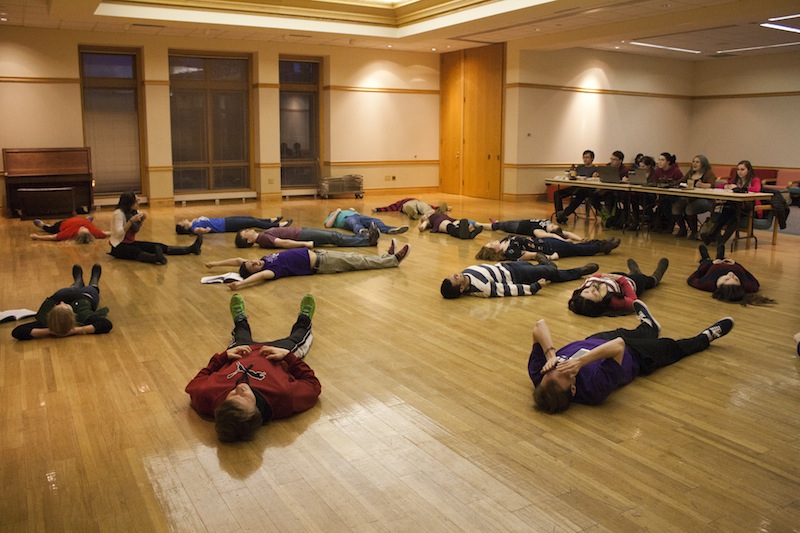 The cast of The Mystery of Edwin Drood performs warm-up exercises during a rehearsal for the musical. [Photo by Elizabeth Lucy ‘15]

The show will go on for the Marquis Players, but with less. Reduced funding from Lafayette College Student Government has forced the charity theater group to cut costs in the production of “The Mystery of Edwin Drood” ahead of their Mar. 26 opening night.

Student government has implemented a new budgeting system this semester that requires organizations to make separate funding requests for events, rather than including these monetary values in an annual budget. This new funding method, known as the Program Event Request System, affects any organization wishing to host an event such as guest speakers, themed programs and plays. The funding for the musical was reduced by 15 percent of the group’s original request.

Cuts had to be made throughout the production to meet the budget student government allocated to the group, Production Manager and Operations Manager of the Marquis Players Ryan Kraus said. Some departments, such as costumes, remain unaffected by reduced funding, while others are impacted enough to necessitate changes in the structure of the production. The performance, for example, now has fewer microphones, which is resulting in less cast members being highlighted in the production, Kraus said.

To reduce the royalty costs of producing the play at Lafayette, The Players also eliminated the availability of balcony seats for each of the three shows.

“It was certainly easier for us on an annual system,” Kraus said. “Right off the bat, we knew exactly how much money we had and we could allocate from there across the entire organization. But if it makes more sense for student [government] to do it this way, then that’s something that we can work with.”

Student government Vice President Scott Bradley ‘16 said he hopes that students do not view this new event budgeting policy as a means to cut funding from organizations. Monetary allocation is based upon the need of the organization hosting the event.

“No clubs were ‘cut funding,’” Bradley said. “Those clubs that give us overestimated requests experience the greatest discrepancies in the amount allocated versus the amount requested.”

Little is open to discussion to address complaints or disappointments within the organizations who did not receive their full request for event funding.

“Student Government will respond to disappointment with these cuts as we always have: through personal dialogue,” Little wrote in an email.

In terms of improvements to the new Event Budget Request system, Kraus would like to see more transparency between the Budgeting Committee and the organization. Discussions at each stage of the decision making process between student government and the organization would greatly benefit both sides.

“There seems to a be a learning curve for student [government] and for us figuring out how to do a new event space budgeting system,” Kraus said.