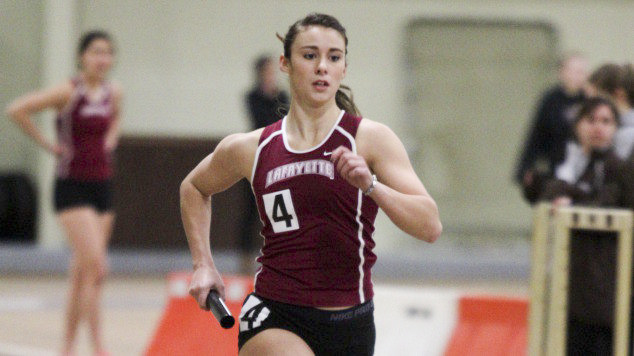 As a freshman athlete, Brittany Powell looked up to senior teammate Joelle Neilson, but this winter, it would be Powell, as a senior, who would break her mentor’s indoor long jump school record. Her teammate, Erin Keen, would join her in making school history by setting the record in the 60-meter dash.

Powell, a jumper and short distance runner, jumped 19’ 5 1/4” in the long jump at the Lehigh- Lafayette indoor dual meet in January. This jump earned her the top spot in the school’s history for the indoor long jump, putting her ahead of Neilson, someone she describes as her role model.

“I looked up to her in almost every aspect of what she did,” Powell said. “She’s a great athlete, she’s very composed. The way she carried herself was very inspirational.”

This spring, Powell looks to steal a few more records from her mentor, as she will challenge Neilson’s school record in the outdoor long jump, as well as the triple jump.

This record is just one highlight of an impressive winter season for the senior. She was also named the Patriot League Female Field Athlete of the Week twice during the indoor season. She capitalized on her success at the Patriot League Indoor Track and Field Championships this past weekend, where she came in first in the long jump and fourth in the triple jump.

“More than anything else, I just want to be the best I can be,” Powell said. “I want to finish knowing that I put everything I could have into it.”

After graduation, Powell said she hopes the qualities that served her, as a Lafayette student-athlete, will help her next adventure. The interdisciplinary major, focused on child development and social justice, already has a job as an elementary school teacher at a New Jersey school.

“Being an athlete here at Lafayette builds a lot of character,” Powell said. “It teaches you to handle a lot on your plate at one time.”

Junior runner Erin Keen joined Powell in her history-setting winter season. At the Patriot League Indoor Track and Field Championship this past weekend at Navy, Keen broke the school record in the 60-meter dash. She also joined the 4×400 meter relay team of Drew Davis, Haley Langton and Devin Smith in setting a new school record. In addition to making the school record, Keen finished fourth in the 60-meter dash and first in the 4×400 meter relay at the Patriot League Championship meet.

Keen admits that she herself was surprised by her success at the championship meet. During a winter season she claims has been challenging, she accomplished what she calls one of her “ultimate goals.”

She admits that she didn’t have her eye on any records. She simply showed up and ran her hardest and she plans to continue to use this strategy. The junior hopes to translate this indoor success into spring season confidence. With a new idea of her potential, she hopes to continue to pursue both personal records and placing finishes.

“I’m hoping to see myself on the podium stand because I haven’t actually been there individually,” Keen said. “I know it’s a great experience being there with my relay team. I would kind of like to see it for myself.”