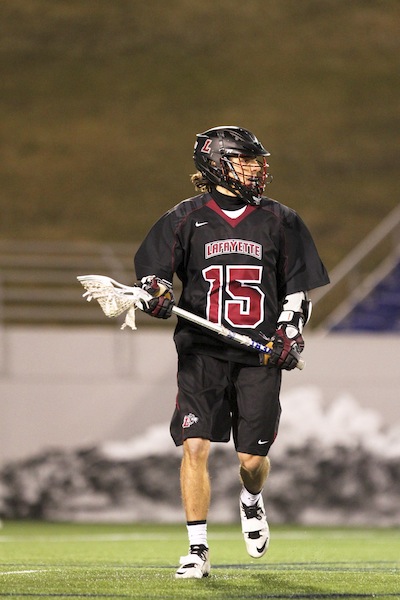 Senior Sonny Round looks for a teammate to pass to on offense.

JS: Did you play any other sports as a kid?

SR: I’ve played lacrosse since 1st grade, but I’ve played hockey too. I played basketball until my sophomore year of High School, but since then it’s been mostly lacrosse.

JS: What is it like to go from a team that had 68 straight wins [at Summit High School] and two State Championships to playing at Lafayette?

SR: It was a tough transition. Obviously playing at a high level in high school made the transition easier, but from a commitment stand point and from a competition stand point its night and day. It’s the speed of the game and our coaches are always on us year round reminding us it’s a year round sport and you really can’t take any time off, things like that. So, that was probably the hardest part about the transition between high school and college. But also, being on a team where you win 68 games in a row, it’s almost a false reality. That kind of stuff just doesn’t happen. Here, at Lafayette, we’ve experience more losses, which we are turning around, but that’s just the nature of the game. Especially in college the competitiveness is just so much higher.

JS: Stats-wise here at Lafayette you’ve put up some great numbers. Is that scoring just momentum carrying over from high school?

SR: We had some coaching changes and my sophomore year I was really just fortunate to be the guy that handled the offense, you know, with the ball most of the time, which is reflective in my statistics. Junior year I kind of had a down year, but coming into this year we are spreading the rock out a lot more. We just have a lot more guys that can play, a lot of younger guys that the coaches have recruited that are just real talented. And that makes you more potent as an offense when you have six guys on the field that can score at any time.

JS: What’s the atmosphere like having a lot of young guys?

JS: This week you play Army and other than being a great opponent does the history and your schedule put a little more emphasis and emotion in this game?

SR: It’s a Patriot League game. Obviously, these are the ones that matter the most and coming off a game against Colgate where we honestly just shot ourselves in the foot with a 7-1 first quarter deficit. We came back and played great, but at the end of the day it’s still a loss. And we want to carry that momentum into Army, but anytime you play Army/Navy these guys are just the highest physical specimens and regardless of past incidents we do have the utmost respect for our armed forces, these guys who essentially put their lives on the line for our country. So, it’s an honor to play against these guys, but at the end of the day it’s a lacrosse game and we’re competing.

JS: Is there anyone, other than the players that have had a real effect on the squad?

SR: Obviously, the coaches do a great job, but we wanted to especially thank as a team Bruce McCutcheon for putting his neck on the line to get the football field cleared. It makes a huge difference when you practice on the environment you’ll be playing in.

JS: Is there anything you want to make sure you finish up on or off the field before you graduate in the spring?

SR: It’s starting to sink in that this is the last time I’ll be able to play lacrosse at such a competitive level. So, I’m just playing every game like it’s my last, because at this point it could be.

JS: Why did you decided to play college lacrosse?

SR: For the love of the game. When I came here we didn’t have scholarships, we do now. But I didn’t want to give up the game and I knew since I was a kid I wanted to play Division 1 Lacrosse. Also, isn’t it obvious? For the girls.