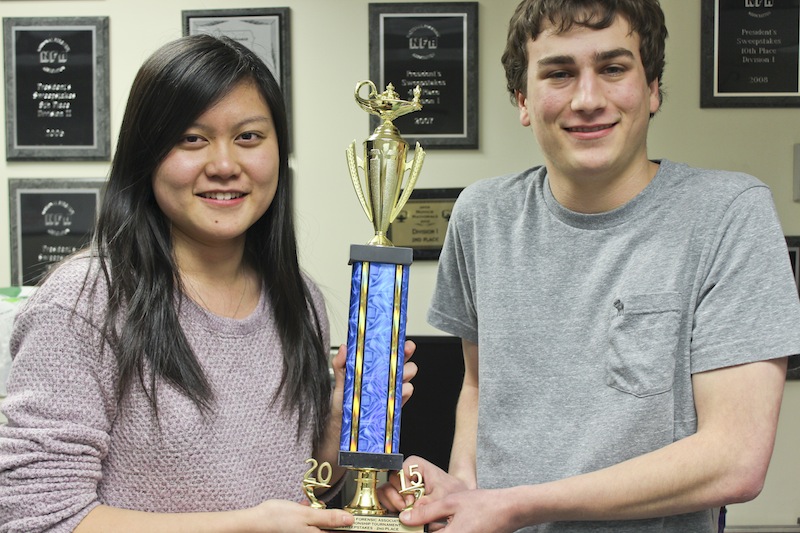 Held over the course of two days, the tournament began with preliminary rounds in which participants were scored and received a placement from the judges. Participants advance to the final round based those results.

Chen, an international affairs and French double major, competed in a total of three events at the tournament. She placed second in informative and persuasive speech and claimed the title of state champion in rhetorical criticism.

Her rhetorical criticism speech, which she prepared months before hand and critiqued after every event, discussed a prison in Louisiana that was making money from an inmate rodeo show and its relation to “bum fights.”

“Rhetorical criticism is basically analyzing the persuasion behind the event,” Chen said. “You go through a theory, the main points, what they are arguing, and then you go through the actual event (the prison’s rodeo show) and apply the theory. What can we derive from this, what does this reveal about ourselves and society?”

She has been a member of the Lafayette Forensics team since her first freshman year. Like many of her other teammates, she had no prior speech and debate experience.

Chen competes in platform speeches and has been extremely successful. Along with the state title, she also earned a bid to the Interstate Oratorical Association Tournament in Georgia at the end of April with her second place finish in persuasion.

To qualify for the IOA, a student must place first or second in the state tournament. Chen is excited to be joining other top competitors around the nation and considers it a privilege to have her speech published in “Winning Orations” along with the other finalists.

Walker, a policy studies major and “avid news junkie,” was immediately intrigued by the extemporaneous speaking, an event focusing on current events, when he joined the team in September. During the state tournament Walker placed third in “extemp,” but won the title for impromptu speaking.
“You get a quotation,” Walker said, explaining his winning event, “and have two minutes to come up with a five minute speech interpreting and agreeing, or disagreeing, with that quotation by using examples.”

With this victory, Walker qualifies for the Novice Nationals Tournament at Butler University, as well as the regular National Tournament at Ohio University. To qualify for Nationals, a student must place in the top six of an event during any tournament throughout the year.

The Lafayette Forensics Society has 10 tournaments scheduled this semester alone, according to director Scott Placke. Those tournaments provide ample opportunities for other team members to qualify and plenty of time for team bonding.

“It’s a family,” said Walker. Chen and Walker are eager to acknowledge the hard work of their fellow teammates and the benefits their involvement in the society has on their everyday work as students.

“The ability to speak off the cuff, that is a really nice skill to be developing,” Walker said.

Placke, who also teaches a public speaking class at Lafayette, agrees with these sentiments.

“This activity is probably one of the most valuable things someone can do scholastically,” Placke said. “Classes teach you a specific body of knowledge. We teach the things that are even more fundamental.”

So very proud of you Aaron – keep up the good work.