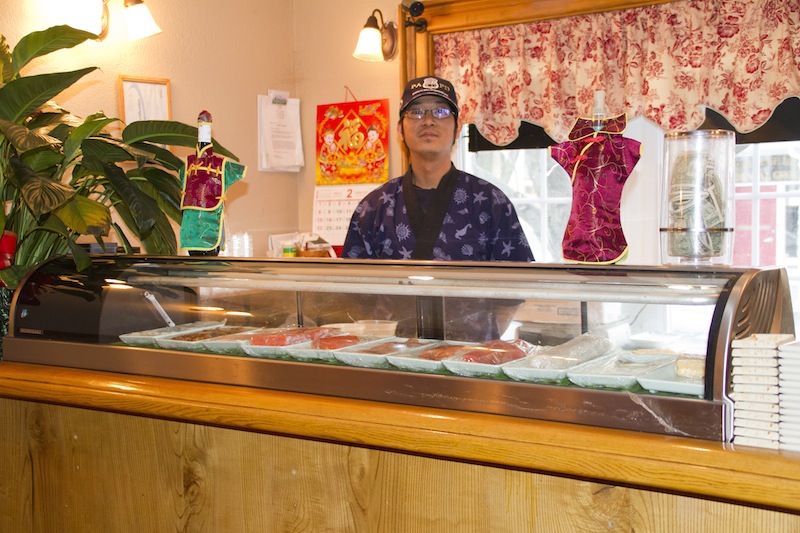 Qixin Yu, owner of Plum house, stands behind the sushi bar at his restaurant.

The integration of Lower’s new sushi options into Lafayette dining poses a potential threat to the business of other local Japanese restaurants in Easton.

Lower’s new sushi station, run and owned by the company Edo Sushi Express, is Lafayette’s first sushi co-op and according to Mya Sann, head chef behind Edo, it has been very successful so far.

With Edo Sushi offering a multitude of “grab ‘n go” ready-made options that fall under meal equivalency, some students feel that it is more convenient to eat sushi at Lower than at other off-campus restaurants.

“Students are busy … they don’t want to take the time to wait,” Sann said.

The introduction of Edo Sushi provides competition to Plum House, a Japanese and Chinese restaurant on Cattell Street. Lower’s sushi option is now factoring into students’ dining decisions when considering where to eat Asian cuisine.

“I would say that it hinders how often I go to Plum House, because if I am going to make the effort to leave campus for sushi then I might as well head to Jasmine’s,” Daria Donato ‘16 said. “Otherwise I will stay on campus and eat the efficient Lower sushi.”

Other students however, feel that as long as they are without the transportation to drive to Jasmine’s, a popular local sushi and Hibachi restaurant down the hill in Easton, Plum House offers a better experience.

“[Plum House] is a better and tastier option for students without cars since it’s right on Cattell Street,” Maggie Noonan ’17 said. “Otherwise, I would pick Jasmine’s because it offers a larger sushi selection and a Hibachi option.”

Plum House recently rolled out a new Chinese menu in addition their original Japanese menu, differentiating their restaurant from Edo and Jasmine.

Despite the mixed opinions from students, Plum House owner Qixin Yu does not think the new sushi bar at Lower will have any effect on his restaurant’s business.

“I don’t mind that Lafayette now has a sushi bar, because students are still going to want fresher sushi,” Yu said. According to Yu, any change in Plum House’s business is due to the colder weather discouraging students from walking outside to Cattell Street for dinner, not because of Lower’s new sushi bar.

“I don’t think [Lower sushi] will affect Plum House too much—I think everyone will gravitate to Lower for a while because it’s easy and available, but after some time people will want to switch it up again,” Brian O’Neill ’16 said.

With Plum House’s new menu choices and the debut of Lower’s sushi selection, students now have an assortment of possible places to grab a bit of Asian-themed food.

View all posts by Abigail Perham →