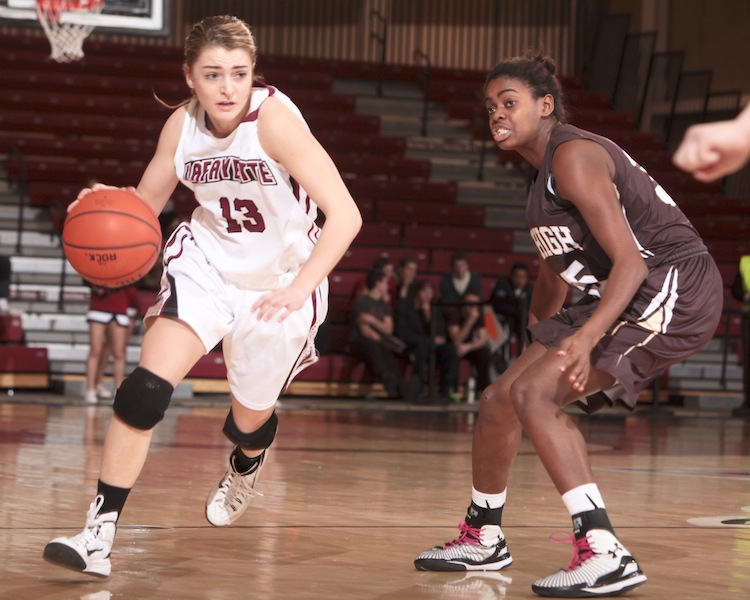 Junior Jamie O’Hare runs the offense for the Lady Leopards

Both teams win in close fashion against their number one rivals

In the wake of Lafayette’s dominant win against Lehigh this year at Yankee Stadium, the word “rivalry” has been echoing in the minds of Lafayette student athletes for months.  Every athlete at Lafayette has a special relationship with the big game, itching for their moment to represent the Leopards against the Mountain Hawks.

This weekend, both the men and women’s basketball program carried on in the same vein as the football program, surpassing Lehigh in close wins. The men’s basketball team bested the Mountain Hawks by just two points in a 63-61 win, where senior Dan Trist recorded his seventh double-double of the season with 14 points and 10 rebounds. The women’s team won by a score of 59-51, with Emily Homan scoring in double figures for the 28th straight game.

For the seniors, this may be the last time they ever get to don red and white in one of the most competitive matchups in college sports.

“My favorite moment [Lafayette-Lehigh] was probably this past weekend,” said senior captain Maddie Peabody. “Everyone on our team played well. It wasn’t a blowout either way [for Lafayette or Lehigh], which has happened in the past. Obviously I would love to beat Lehigh by 20 points every time we play them, but it is fun to have each possession in basketball game mean something. This past weekend we were down and had to go on a little run to catch up, but that is what makes it fun.”

For men’s senior captain Seth Hinrichs, the atmosphere tops any other game of the year.

“The difference I would say would be the crowd support,” Hinrichs said. “There’re always a few more people in the stands just because it is a rivalry game, so it’s always a little bit more fun atmosphere to play in.”

However tight of a game it is, or how raucous the crowd is, both Peabody and Hinrichs agreed that the preparation for the game is just like any other.

“They’re another conference opponent, just like Bucknell or American or another team in conference,” said Hinrichs. “So I wouldn’t say we prepare any differently.”

This professional approach only goes so far, as emotions can slip through the cracks in the days leading up to the game.

“Every game matters and we scout them like we do every other team,” Peabody said. “But there is something always in the back of the motive that this game is one that means just a little bit more. Lehigh usually has a good team and knowing it is going to be a good game puts more emphasis on the need to play well.”

Since Lehigh guard C.J. McCollum took to the NBA in 2013, the Lafayette men’s basketball team has enjoyed success against their rivals.

“My freshman year we didn’t fare so well [with McCollum as a junior],” Hinrichs said. “We lost both the games that year. And then sophomore year he got hurt and we were able to win all three games against them.”

Since then, Lafayette men’s seniors have managed a winning record against Lehigh, moving to 5-4 overall. For both Peabody and Hinrichs, the overwhelming feeling upon finishing up the regular season rivalry has been one of appreciation for having been a part of such a long tradition.

“I love rivalry games and I have always heard so much about the rivalry is always an honor to be a part of,” Peabody said. “Over my four years, I have come to appreciate the rivalry that much more—especially this year, with the lead up to the 150th game.”

“Just being a part of one of the biggest rivalries in college basketball and in sports in general–it’s been a really cool opportunity to have that experience,” Hinrichs said. “And obviously going out on a winning note is always nice too, and that’s something you can cherish for forever.”