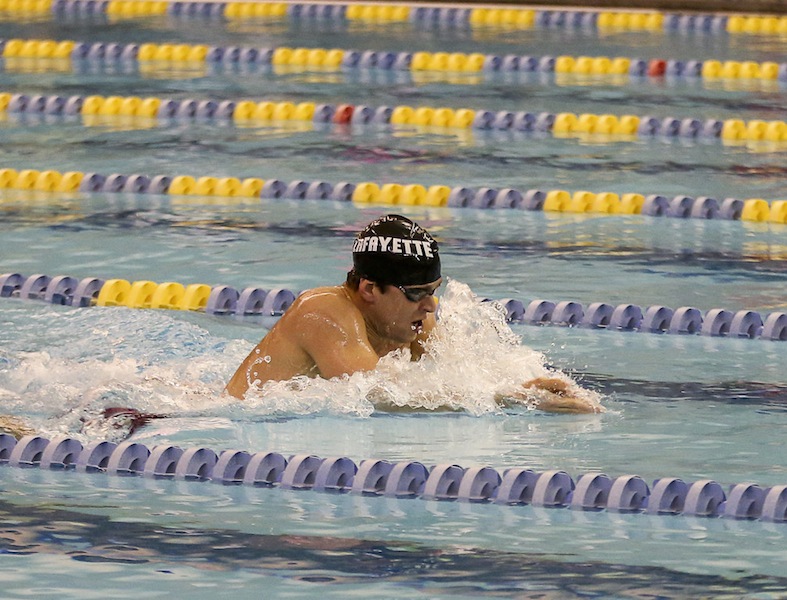 Swim team takes to the pool for Patriot League championships

Although they didn’t win the swimming Patriot League Championship, a strenuous three day-stretch of races, the Leopards made it back with some accomplishments to be proud of. With the added competition of Boston University and Loyola, the championship has become even more challenging.

Junior Greg Grewal was the top Lafayette finisher this past weekend placing 10th in the 200-meter breaststroke with a time of 2:01.63, just one second shy of his own school record set in 2014.

For the women’s team, junior Jaclyn Andrews swam a 2:06.9 in the 200 butterfly finals to achieve 13th place. Butterfly finals are on the last day, making it difficult to get your body ready for just one more race after a weekend of racing.

A Lafayette team record was also broken in the 200-meter freestyle relay comprised of senior Meg Kaveney, freshman Sydney Wight and seniors Jane Kuntz and Jacqueline Johnson. The record was set in 2007 and was broken by just 0.03 seconds with a time of 2:32.06.

“It was really exciting knowing we broke a record because going into it we weren’t even thinking about it,” senior Jane Kuntz said. “We finished and walked over to our coach and he told us we broke it we were all really happy because we each got our best times in our splits.”

Kaveney started the first leg of the relay and was a key reason why the Leopards got such a fast start. Kaveney normally swims the 50-meter freestyle and is known for her speed. A total of nine school records were made, five on the women’s side and four on the men’s. The men finished seventh out of ten and the women finished in ninth. Navy swept both men’s and women’s titles.

Navy has dominated the championship for as long as most swimmers can remember. Compared to Lafayette, they have multiple scholarships to give and, being a government funded institution, students get to go to school for free.

“They’re on a different level. If you’re a really great high school swimmer and you’re looking to swim somewhere fast you’re looking at Navy,” senior Evan Newbold said. “They have a good reputation—they’ve always been and always will be known as a fast school.”

That seems to be the sentiment as fellow teammate junior Scott Bradley echoed Evan.

“Navy is so dominant because it’s a zero cost school that draws in a lot of kids who want to get a good education,” Bradley said. “Success builds upon success and when you have a couple successful years more and more fast kids want to come to your program, it’s a snowball effect.”

The Naval Academy is so alluring with all the benefits outside of it: the bonus of an automatic job paired with the reputation as a great school with a great swimming program is easy to see why Navy attracts so many good swimmers. Despite Navy’s efforts, the Leopards are still improving.

“I think our team has grown in a lot of ways this year,” senior Sidney Pahmer said. “Last year BU and Loyola being added to the league added a level of competition and last season we had a hard time coping with it being harder to get into finals. The energy on the pool deck this year was a lot better, we knew what we were heading into and it made it easier for us to be proud of our team.”