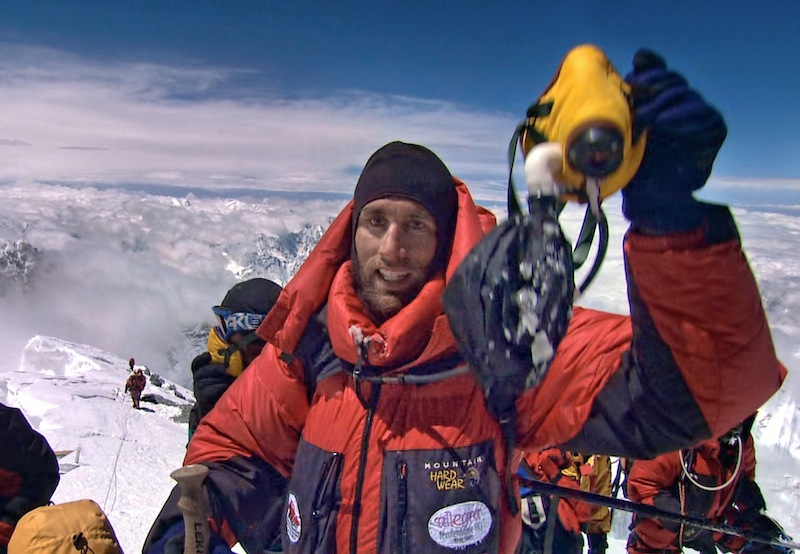 Erik Weihenmayer after one of his climbing expeditions.

Erik Weihenmayer, mountain climber, author and humanitarian, will speak at the college on May 23 as the 180th commencement speaker for the 2015 graduating class.

Since he reached the summit in 2001, Weihenmayer stands alone as the only blind person to climb Mount Everest. He has also written two books, the latest of which is “The Adversity Advantage: Turning Everyday Struggles into Everyday Greatness.” In the book, he discusses ways to use adversity to encourage personal development.

Weihenmayer co-founded his own nonprofit organization in 2005 called No Barriers USA, which works with mentally and physically disabled people to overcome hardships in their lives.

Triumph over adversity seems to be a theme that runs throughout Weihenmayer’s life. He lost sight at 13 years-old from a rare genetic disease that cause layers of the retina to split called retinoschisis, according to an article from The Lafayette previewing a lecture he gave at the college in March of 2007. Still, he uses his blindness to his advantage and even attributes some of his success to it.

“I just didn’t know if I could be an athlete or not, because I wasn’t able to do much,” Weihenmayer said in a recent interview with National Geographic. “So when I finally went totally blind it didn’t matter anymore. The gloves were off, and I could do anything I wanted. So going blind made me an athlete. That’s the weird part.”

President Alison Byerly believes that Weihenmayer’s story will inspire graduating seniors as they move on from college life.

“I believe that anyone who hears Eri[k] talk about the challenges he has had to overcome to accomplish what he has will leave Lafayette feeling that they are capable of doing great things,” President Byerly wrote in an email.

Weihenmayer continues to overcome challenges as a part of his life. He kayaked through the Grand Canyon on the Colorado River, a trip totaling 277-miles, in 2014 with Lonnie Bedwell, a blind Navy veteran.

Not only has Weihenmayer climbed Mount Everest, but also the highest mountain on every continent—otherwise known as the Seven Summits. He finished this goal in 2008.

Just five years earlier, a documentary about his expedition to the top of Mount Everest entitled “Farther Than the Eye Can See” was released. The film received first place at 21 international film festivals and two Emmy award nominations.

In addition to speaking at the 180th commencement, Weihenmayer will also receive the Doctor of Humane Letters, an honorary degree awarded by the college and approved by the board of trustees.