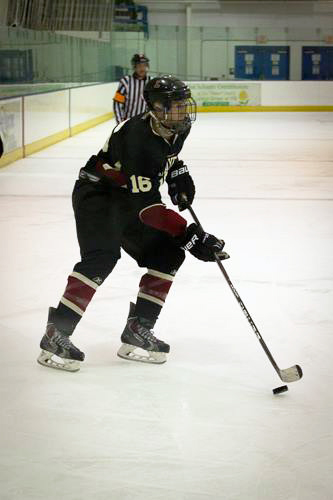 Sophomore Sam Komrower looks to pass to an open teammate.

Adam Nussbaum: Take me through a typical in-season week.

Sam Kowrower: We have two practices per week with two games every weekend. We work out on off-days with our lifting partners.

SK: I was a four-year starter on my high school golf team.

AN: When did you start playing hockey and how did you know it was right for you?

SK: I started when I was four. My mom signed me up for skating lessons and my dad incorporated hockey into my life shortly after. I was always seen with a hockey stick in my hands and I just grew up with the sport. I’ve always had a love for the game and have kept with it.

AN: Who has been the most influential figure throughout your hockey career?

SK: Coach Tom Preville. He was my youth coach during two years of midget hockey. He was the strictest and hardest on me out of all of my coaches. I wasn’t even a starter my first year with him, and then he pushed me to work hard and I was a captain my second year. He taught me that hard work pays off and helped me to develop into the player I am today.

SK: Well, the best players in the world play Division I Hockey. It’s basically a breeding-center for the NHL. That being said, it was more realistic for me to play Division III hockey and even though I spoke to Bates and Bowdoin, I decided that wasn’t the route I wanted to take. It required playing a post-graduate season at a Prep School and then a year of junior league hockey. Lafayette didn’t recruit me, but I spoke to the coach at Lafayette when I came for Accepted Students’ Day and really liked both him and the program. That’s when I decided I was going to play Club Hockey.

AN: What changes and improvements did the team make over the course of the season?

SK: We had a full roster and even had to cut some kids. Our assistant coach took over as head coach. He brought the energy and hockey IQ that we needed at the helm. He played Division III hockey and instilled a varsity atmosphere. We started practicing faster and training harder.

AN: How do you feel about the team’s performance this past weekend in the Great Northeast Collegiate Hockey Conference playoffs?

SK: The team performed very well. We faced adversity in each game; we were trailing in all of them, and managed to come-from-behind and win two out of three games. We fell short of our goal of winning the championship, but we’re coming back hungry next season. Everyone has their second-place medals hung in the locker room as inspiration.

AN: Who on the team deserves a shout-out for their performance this season?

SK: Kyle Brennan. He’s our captain and led the team in points. Alex Neeb and Eli Karp. They were our senior defensemen and really stepped up this year. Parker Gaglione, too. He’s a freshman forward that stepped up to the first line after losing Graham Thomas to study abroad. Kyle, Alex and Eli were leaders on and off the ice and made sure we were putting forth our best effort.

AN: How do you feel about your personal performance this season?

SK: The way I approach hockey is that there’s always room for improvement. Hockey is a team sport and as long as I can tell myself that I have put forth 100 percent effort, I’m content.

AN: What are your goals for next season?

SK: Listening to music in the locker room.

SK: I am one of the founding fathers of the Lafayette Club Golf Team.