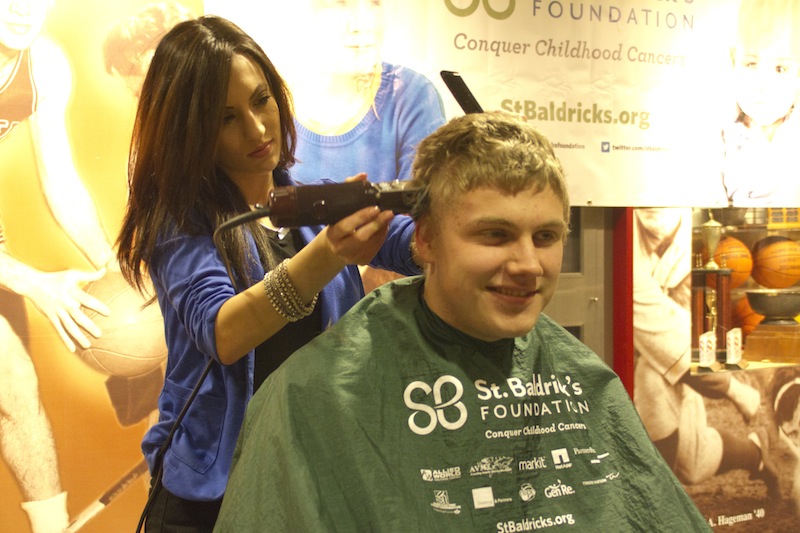 Dan McLaughlin ‘17 has hair shaved after donating over $900 to the cause.

The centerpiece of this effort to raise awareness for pediatric cancer was a head shaving station, where members of the Lafayette community were encouraged to shave their heads in solidarity with those affected by cancer.

This was Lafayette’s third year participating in the shaving event. Tom Heard ‘91 originally brought the head shave event to Lafayette in honor of his son David who passed away in 2011 after a two-year battle with neuroblastoma.

“One of the things that [David] wanted was for his mom and I to keep fundraising and try to find a cure,” Heard said. “He was a big fan of Leopards basketball and he came here [to games] from the time that he was a little baby until the time that he got sick…Lafayette has really embraced this battle that we are in to try to raise some money and find a cure. All the athletic staff has been really great and the students have been a big help.”

Lafayette volleyball player Katy Rooney ’15 helped to organize the event with help from David’s mother, Susan Heard. Rooney, who was nominated as an event chair by the Student-Athlete Advisory Committee, applauded SAAC’s role in “encourage[ing] student athletes to be more involved on campus” through events like the St. Baldrick’s Big Shave fundraiser

Ty Fein, the nine year old son of Lafayette football coach Mickey Fein, was in attendance to participate in the event. Ty has now had his head shaved in each year of the Big Shave’s existence.

Excited to participate again, he wore a button that read “Every 3 Minutes,” to represent the statistic that every three minutes a child is diagnosed with pediatric cancer.

After multiple years of participation, Ty has gotten used to losing his hair via razor and is no longer nervous to participate. Ty’s incentive to shave his head every year is “to help kids fight cancer and to make sure this stops.”

As of Wednesday evening the effort had raised $23,321, which is 93 percent of its goal of $25,000. The final totals were not available before The Lafayette went to press.

Sean Langen, a friend of the Heards and three-time participant in the big shave event, noted the power of the Big Shave.

“Its about awareness,” Heard said. “It’s not about how much you donate at events like this. It’s that you consider the impact to the kids… the desire to help them fund research is the main thing, that’s the reason I do it.”