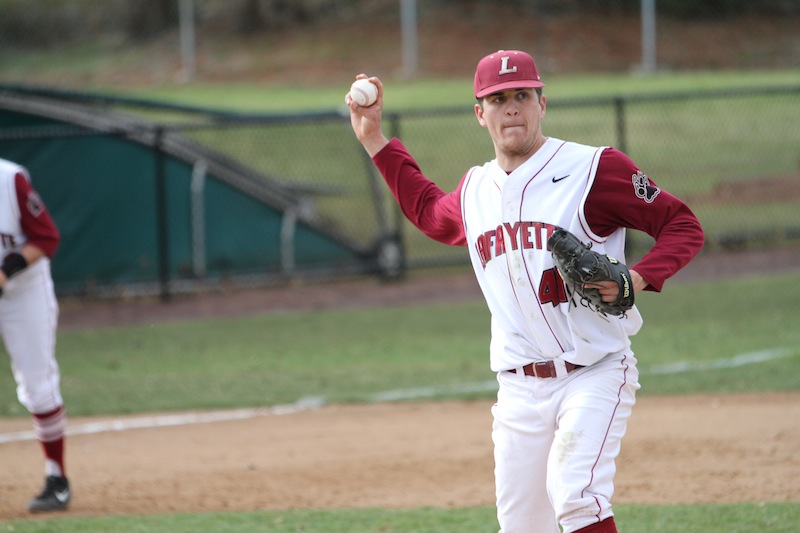 Senior Cory Spera warms up his arm before taking the mound.

The players travel to Durham, NC, Saturday to start the season

It’s been a long cold preseason, but the men’s baseball team will finally open up their season on the road this weekend against North Carolina Central.

Although the campus has succumbed to a flu outbreak on campus, the baseball team has managed to stay in good health. In the past, many players became ill in the beginning of the season.

But head coach Joe Kinney doesn’t just mean asymptomatic health. For the last two years, the Leopards had key players deal with injuries that limited or prevented them from playing.

Schwartz was part of the core pitching rotation, but was only able to pitch until the second week of the season. Lipe played in five games with a back issue, which led to him missing the entire rest of the season along with a portion of summer training.

Kramer tried to play through a stress fracture in the fall of 2013 that resulted in a broken arm come springtime, sitting him last season and this fall.

“The past two years I haven’t played in a season opener so it’s really exciting to finally be healthy and be a veteran starter now,” Kramer said.

Hudson managed to play through last year’s entire season, but had two surgeries immediately following the season’s end. He spent the whole summer recovering and was able to workouts in the fall.

This season, there is a battle to start at first base. Now, there are four players battling it out for the spot. Sophomore Alex Woinski, who batted cleanup last season, will fight against senior Tim Lazor, Lipe, and Schwartz.

Despite being a pitcher, Schwartz is remarkably able to play first base. But this weekend coach Kinney will alternate between Schwartz and Lipe at first, while Lazor and Woinski compete to start in left field. Whoever doesn’t get the nod will bat as the designated hitter.

“Between those four guys, there are essentially three spots and they’re all swinging to a point that they warrant at bats in games…it’s up to me to divvy that up,” Kinney said.

The baseball team will also welcome in 11 freshmen to the team. Freshman John Cain, a 6’10’’ left-handed pitcher was being recruited to play professionally his senior year of high school, but ultimately declined and decided to play college baseball while earning a degree in engineering. Freshman Steve Cohen will start at shortstop this year and freshman Drew Aherne will start in center field.

“Both had very positive fall seasons, which is good because there’s not a whole lot that can change between then and now as long as everyone is healthy,” Kinney said.

Cohen said that despite this Saturday being his first career game, he doesn’t seem to be shaken by nerves.

“I’ll definitely be a little nervous but it’s the same game I’ve been playing my whole life,” Cohen said. “It shouldn’t take me too long to get comfortable doing what I’m used to.”

While pitching was a forte for the Leopards last season, pitching does not always win games. The team batted just .253 as a team last season. The Leopard’s offense needs to improve, which is exactly what Coach Kinney has been implementing so far. The mental aspect is just as important as the swing itself, according to Kinney.

“It’s one thing to swing and hit a ball but there’s a mental aspect of processing information very quickly during the time of the pitch- should I swing, should I not swing,” Kinney said.

The players have been practicing those mental concepts by watching film and videos of their own mechanics.

Apart from improving their offense, the Leopards have one clear goal in mind: to be consistent. Consistency is the key to unlocking their other goals like winning the Patriot League.

“This is something we’ve really tried to emphasize in our practicing and certainly as we start this weekend,” Kinney said.

The team will ultimately look to rebound from last season, finishing at 15-26 overall and 5-13 in conference play. The team travels to Durham, N.C. this weekend for a three game stand against the Eagles.